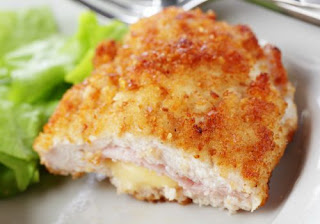 My Number One Fan never ceases to amaze me, for many reasons, but noteworthy here for her ability to find great recipes on the Internet, adapt them to make them her own, and create something really outstanding.  It will invariably be selected for its ease in preparation and her ability to use a minimum of pots and pans.  Case in point was this recipe originally called “Easy Baked Ham and Cheese Stuffed Chicken,” from the real house-moms’ website.

I realize that I’m taking some poetic license by calling this Chicken Cordon Bleu.  It’s a facsimile of the original version.  But the truth is that the original recipe has been widely bastardized, and in fact, even the first recipe printed in a cookbook sometime in the late 1940s or early ’50s, and then widely distributed in newspapers throughout the country in the ’60s, was a bastardized version of what was originally called Schnitzel Cordon Bleu, which might have been chicken, but more often was pork or veal.

The widely held notion of anything called Cordon Bleu in today’s culinary parlance will mean it is stuffed with ham and Swiss cheese, breaded, and then pan fried or deep fried.  It is also a popular misconception that the recipe originated from Le Cordon Bleu, the international school of French cooking.  It did not.  The recipe originally came from Switzerland.  “Cordon Bleu” is merely French for “Blue Ribbon.”

This recipe is carb and calorie friendly to the extent that it is neither breaded nor fried.  But it is rich, particularly with the unbelievably good mustard cream sauce that must be served along side the chicken for this dish to be truly enjoyed.

Of note here is the kind of ham you should use for this dish.  Ham seems to be its own food group in the supermarket these days, with dozens of choices.  Use whatever you like. Probably the best choice would be to get freshly sliced ham of a good reputation (like, Boar’s Head) from the deli in your grocery store if you have one.  In our case, we used a full 9 oz package of Hillshire Farms Black Forest Ham that is probably our favorite go-to for the pre-packaged, nitrate-loaded, water-added, caramel coloring-added sandwich variety ham of late.  I’ll not defend our choice.

The recipe we’ve modified called for the chicken, once stuffed, to be held together by toothpicks.  Not really liking the idea of wooden skewers through our food, we had metal trussing needles on hand and used those instead.  Use whatever you like, but don’t underestimate the need to do something to hold your bundle together.  The chicken will shrink naturally while cooking and the cheese will melt.  Left unbounded, all of that good stuff will just fall out all over your baking dish.  You might as well modify this recipe as a casserole if you’re going to allow that.

The Recipes
Pre-heat the oven to 400 degrees.

Divide your ham into thirds, so roundly 3 ounces per chicken breast.  Take your cheese slices and stack them on top of one another, then cut them into thirds.  Roll the cheese sticks into the ham slices so that they make a little rolled bundle.

Carefully cut a pocket into each chicken breast by slicing width-wise into the large side of the chicken breast, being careful not to cut all the way through.

For each chicken breast, smear 1/3 of the Dijon mustard over the inside of the pocket, then stuff the pocket with the ham and cheese bundle.  Secure the breast with the toothpicks or skewers

Treat a baking dish with non-stick cooking spray, then lay out the chicken breasts onto the dish, allowing a bit a space between each breast.

Meanwhile, make the sauce by mixing all the ingredients in a microwavable bowl.  Zap for 30 seconds, stir, then zap for another 30 seconds, or until the sauce is smooth and warmed through.

Serve the sauce on the side.