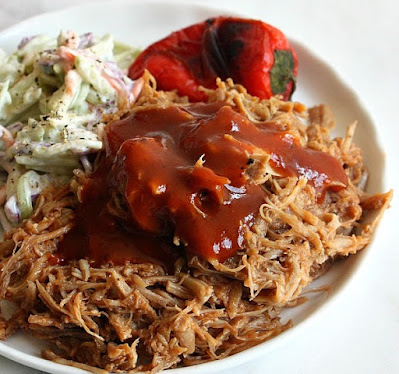 I’ve already defended myself against the merits and demerits of calling something cooked in an oven “barbecued”, when in fact it isn’t.  Read my arguments in the posting “Oven Barbecue” Beef Brisket found here.  Blah. Blah. Blah.

This is really yet another braised pork butt recipe, of which I have a considerable number.  You can find a repository of all of them here.  This one was originally from a website called SmartCarbCooking, and it is the basis of the low carb barbecue sauce that I used in the brisket recipe above, but I’ve taken the time to rewrite it for you here for convenience.

We’ve made this pork recipe many times, but it never found its way into Kitchen Tapestry until now.  I’m not sure why because we love the dish, and while it isn’t true barbecue, it’s still pretty damn good.  I also like the low carb barbecue sauce as opposed to the high sugar contents of many bottled sauces, but if you would rather not make this recipe in favor of the convenience of applying a bottled sauce, I recommend Stubb’s Barbecue Sauce.  It’s the best on the market, and I’ve tried nearly all of them. Learn about it here.

You’ll need a dutch oven and a blender to make this recipe and it goes great with Cole Slaw.

The Recipes
Blend all the Rub ingredients in a mixing bowl with a whisk.  Rub some olive oil over the pork and liberally apply the rub, and do what you should as the name implies:  rub it into the meat well.  Do this on all sides of the roast.

Preheat your oven to 325 degrees.

Get a Dutch oven hot on the stove over medium heat with the canola oil.  When the oil is shimmering, place the pork roast, fat side down into the hot grease and let it cook for 4-5 minutes.  Then, turn over so the fat-cap is on top.  Cook another 4-5 minutes.

Pour in the beer and vinegar, slap on the lid and put the Dutch oven in your pre-heated oven.  Cook it for six hours. At three hours, turn the oven heat down to 300 degrees.

In the mean time, put all the ingredients for the sauce in a sauce pan over medium high heat, and once it starts to simmer, turn the heat to low and cook covered for thirty minutes.  Allow it to cool for a couple of hours, and then in batches, put the sauce through your blender and blend for 1-2 minutes until smooth without any lumps.  Do not attempt to do this while the sauce is hot.

The sauce will keep for a couple of weeks in the fridge and freezes well, lasting indefinitely.

When the pork is cooked, put it in a shallow roasting pan, and discard the braising liquid.  With two forks, shred the meat and then serve with the barbecue sauce spooned over.