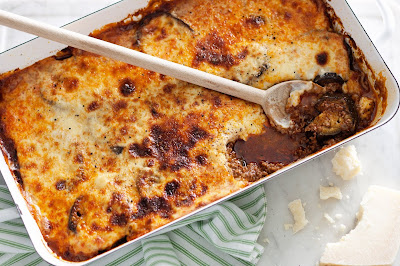 Moussaka is something of a national dish in Greece, but it is thought to have actually originated in Arabia when eggplant found its way into that country from sub-Saharan Africa.  The dish migrated throughout the Middle East and the first known recipe was published in a Turkish cookbook in the very late nineteenth century.  Via Europe, it found its way to Greece and was quickly adopted in much the way southern Italy adopted Lasagna.  Some folks refer to Moussaka as a “Greek Lasagna,” but this is something of a misnomer as it contains no pasta.  If anything, it more resembles the British dish, Shepherd’s Pie, my recipe for which can be found here.

But like Lasagna, there can be wide variations, and many regional adaptations of the dish.  Generally, Moussaka is defined by the presence of four base ingredients: ground lamb or beef, tomatoes, eggplant and Béchamel sauce.  But from there, the variations are endless, including the addition of potatoes, zucchini, chick peas, bell peppers, mushrooms, onions and even cabbage.  Seasonings generally include parsley, cinnamon and allspice, but again, a wide variation of other spices is found throughout Europe, the Balkans and the Middle East.

I took my inspiration from the Spruce Eats website, but as usual made my own adaptations.  Generally, my Number One Fan was complimentary of the first attempt, however, there are some additional variations that I will make on a follow-up attempt, which I have written into the recipe below.  Next time, I will peel the eggplant (the classic dish leaves the eggplant unpeeled as I did on this occasion, but I find that I don’t care for it that much); secondly, I will make twice the amount of Béchamel; and thirdly, I will use a combination of lamb and beef.  On this occasion, I used strictly beef, which was fine, but I think the addition of lamb will give it greater authenticity as a Greek dish, and plus, I really like the taste of lamb.  If you don’t, then all ground beef works just fine.

The Recipes
I prefer to peel the eggplant, but traditionally, it is left on.  As you prefer, peel or not.  Cut the eggplant lengthwise into 1/4- inch slices, and then half each slice lengthwise.

Preheat your oven to 375 degrees.

On a couple of sheet pans lined with parchment paper or aluminum foil, spritz the eggplant slices with olive oil, and season with salt and pepper.  Don’t delay getting them into the oven after applying the salt, or it will begin to leech water out of the vegetable, creating a soggy mess.

Bake the eggplant at 375 degrees for 30 minutes.  You want them slightly soft and limp but still malleable.

In the meantime, in a large skillet over medium high heat, saute the onion until it begins to pick up some caramelized color, about ten minutes.  Add the ground beef and lamb and saute until all the pink color is gone, about another ten minutes.  Drain the pan of all rendered fat.

Add the tomatoes, cinnamon, garlic, allspice, parsley and red wine and season with more pepper than salt.  Mix well to combine all the ingredients.  Just a word of caution on the cinnamon and allspice:  these are very aromatic spices, so measure carefully.  You can always add more later, but it is easy to over-season and over-power the subtle balance of the dish’s flavors.

Continue to saute the mixture until most of the liquid has evaporated, about fifteen minutes.

Put the milk and cream in a microwave-safe container and zap it a couple of times to take out the refrigerator chill.  In a sauce pan over medium heat, melt the butter, and then add the flour a bit at a time as you constantly stir.  When all the flour is incorporated into the butter, this is called a roux.  Cook the roux for about a minute, then, slowly add the milk and cream.  If you are using whole milk, use 3-1/2 cups outright, and omit the cream.  Add the milk a little at a time, allowing it to mix with the roux, and thicken.  Repeat this until all the milk is added, and then continue to stir until the Béchamel has thickened to the consistency of a thick cream gravy.

Temper the egg yolks by first blending them together with a whisk, and then put in a tablespoon of Béchamel sauce while continuing to stir.  Repeat this a couple more times so the yolks have come up to temperature, and then whisk them into the Béchamel Sauce off of the direct heat.  Add a little salt and pepper and your sauce is now ready.

Bake 50 minutes at 375 degrees uncovered.  Allow the casserole to cool for fifteen minutes after removing from the oven so you can extract nice, clean squares.

Serve a small, simple green salad on the side.