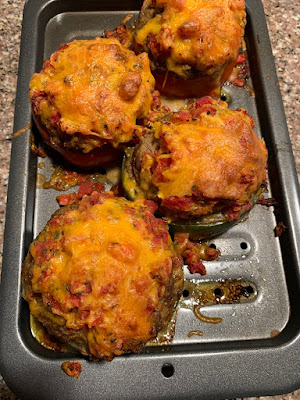 Serendipity is the faculty of making a fortunate discovery by accident.  This recipe is exactly that.  My Number One Fan wanted meatloaf for dinner.  I wanted stuffed bell peppers for dinner, mainly because we had one red and one green bell pepper that were nearing the end of their refrigerated shelf-life.  I decided to blend the two ideas and bloody well thought I was the first to think about preparing individual servings of meatloaf in a ring of bell pepper.  Turns out, I was wrong about that but none of the recipes I saw online were giving me the flavor profile I wanted or were themselves unduly complicated, so I made up this recipe as I went along.  While my idea of putting meatloaf into bell pepper rings in the end was not original, it was nevertheless serendipitous, and my version is original.  To some extent, it’s an amalgamation of my other two meatloaf recipes found here and here.

Slice the tops and bottoms off of the two bell peppers.  Discard the stems, but reserve the rest.  Core the peppers and place them in the boiling water for three minutes.  Remove from the heat, drain off the water and flush the sauce pan with cold tap water until the peppers are cool to the touch.  Remove and pat dry.  Cut each pepper in half width-wise so you have four rings, each about 1-1/2 to 2 inches in height.

Preheat the oven to 350 degrees.  Take a broiling pan, the kind that has an insert with a grate and a bottom pan to catch the grease, and spray lightly with non-stick spray.

In the meantime, finely dice the tops and bottoms of the peppers you previously removed, as well as the yellow onion.  Over medium high heat, sauté them in the olive oil until they begin to caramelize, about ten minutes.  Add the garlic at the last minute and sauté for just a few seconds before removing from the heat.  Put the peppers and onions in a large mixing bowl and allow to cool a bit.

Adding in layers as you go (it will make for easier mixing), crumble the ground beef over the peppers and onions.  Add the beaten egg, cream, ketchup, Worcestershire Sauce, thyme and sage.  Season liberally with salt and freshly cracked black pepper.  Sprinkle the bread crumbs over the whole concoction.  If you prefer a low carb version of this recipe, simply substitute the bread crumbs for a half-cup of granulated pork rinds combined with a half-cup of almond flour. If you do that, or if you’re you’re using un-seasoned bread crumbs, add a tablespoon of dried Italian seasonings to the mix.

Using wet hands (which will keep the mixture from sticking to you), thoroughly combine all the ingredients.  Once mixed, it should easily adhere together into the shape of four even portions about the size of a baseball.  If the mixture is too dry, add a bit more cream; or if it is too loose, add a few more bread crumbs.

Place the four pepper rings on your broiling pan, and fill each with even portions of the meat mixture.  The mixture will overfill each ring, which is okay.  Just mound it up and then using a spatula, flatten the tops of each mound of meatloaf.

Thoroughly drain the liquid from the can of petite diced tomatoes.  In another mixing bowl, combine the tomatoes with one cup of the shredded cheddar cheese and the dried basil.

Bake for one hour in the 350 degree oven.  This goes exceptionally well with mac & cheese!