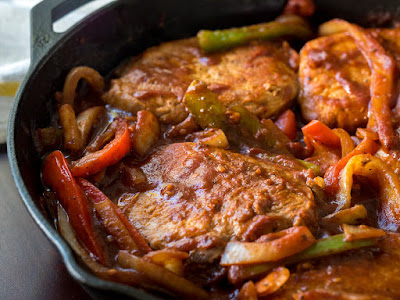 I was looking for something other than a baked or oven-fried pork chop last night, and this is what I created on the spur of the moment.  You will need a cast iron skillet for this dish, or some other vessel that can go from stove top to a four-hundred degree oven.  This recipe also calls for thick-cut pork loin chops, but you could use the more frequently found thin-cut chop by reducing the stove top cooking time to one minute per side, and reducing the oven cooking time to roundly 10 minutes.

The Recipe
Sprinkle about 1/2 tbsp of the oregano and thyme on each side of the chops, and dust with sea salt and pepper.  Add just a touch of olive oil and rub the herbs into the meat.  Allow the chops to sit at room temperature for a half-hour or so.

Pre-heat your oven to 400 degrees.  Over high heat on your stove, get a cast iron skillet hot. Add a couple tablespoons of olive oil and heat until the oil shimmers.  Put the chops into the hot oil.  Turn the heat to medium high and cook the chops for two minutes per side.  Remove the chops to a plate.

De-glaze the pan with the red wine, and allow it to reduce until almost gone.  Add a little more olive oil and then toss in the onions and saute until they begin to pick up some color, about five minutes.

Add the garlic and bell peppers and stir the pan frequently as you saute until the peppers are limp, about eight minutes.

Add the can of diced tomatoes and the Kalamata olives, and bring it up to a simmer.

Nestle the two pork chops into the mixture, getting the bottom of each chop in contact with the bottom of the skillet.  If any juices have collected on the plate, pour them into the gravy.

Pop the skillet into the oven for fifteen minutes.  Serve over Jasmine rice.