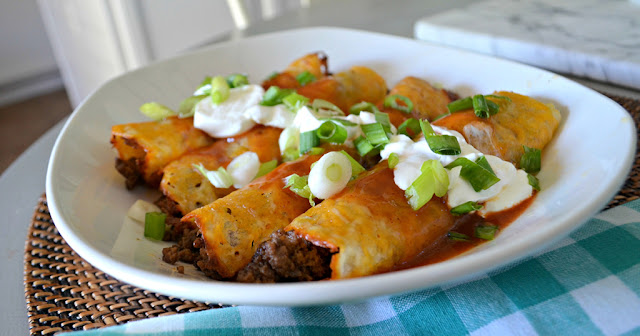 I love Mexican food, but it’s tough to find recipes that are low-carb friendly. More to the point of this posting, it’s been hard, until now, to find a low-carb substitute for tortillas and tougher still to make enchiladas without them.  This is the second recipe I’ve tried with a relatively new product on the market called Crepini Egg Thins.  These are wafer thin, yet durable substitutes for crepes, and a low-carb recipe for Chicken Mushroom Spinach Crepes can be found here.

It turns out that the Crepini Egg Thins with Cauliflower are also excellent substitutes for tortillas.  Aside from corn or flour tortillas being tough on the low-carb diet, canned enchilada sauce is loaded with sugar and corn starch, which are also verboten.  My recipe includes making an enchilada sauce that has no added carbs and tastes better than any of the canned concoctions.  I used the seasoning mixture for this sauce from The Low Carb Life website and it is spot on, including surprisingly, the ground cinnamon. Measure these ingredients carefully. The enchilada recipe itself originated from the Crepini website, but required modifications.  I give them credit for their product and certainly, for showing us all how to use it. 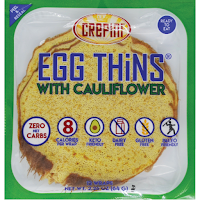 The Recipe
Preheat the oven to 375 degrees.

Melt the butter in a saucepan over medium heat and saute the garlic for just a few seconds, then quickly add the chili powder, cumin, onion powder, cayenne pepper and ground cinnamon.  Stir constantly and allow the seasonings to become aromatic, then add the tomato sauce and salt.  Blend everything well with a wire whisk, then add the chicken broth.  Allow this to simmer on low heat while you continue with the recipe, whisking every so often.

In a skillet over medium high heat, saute the ground beef until it loses all of its pink color, then add the yellow and green onions and saute for another five minutes.  Remove from the heat and allow to cool.  If you used 90/10 mix on your beef, you won’t likely need to drain it of any grease.  If you used a higher fat mix than that, you probably will need to drain off the fat.

In a small skillet over high heat, pour enough canola oil to cover the bottom and to a height in the skillet of about 1/8th inch.  Have a platter with paper towels nearby.

One at a time, place an Egg Thin into the hot oil.  Using a pair of tongs, immediately turn it over, then immediately remove it.  That’s just as long as it needs to slightly cook the Egg Thin and make it malleable. Any longer than those 3-5 seconds in the hot oil, it will start to crisp and that’s not conducive to rolling it into an enchilada.  Allow the Egg Thins to drain well on paper towels.

Ladle in about a third of the enchilada sauce in the bottom of a 9″ x 13″ Pyrex baking dish.

One by one, put 2-3 tablespoons of ground beef, a few sliced olives, a bit of the diced green chilies and a teaspoon or so of the Mexican cheese blend on an Egg Thin, then roll it up and put seam side down in the baking dish.  Repeat this until all enchiladas are rolled.

Ladle plentiful amounts of the enchilada sauce over the enchiladas as you prefer.  We didn’t use all of it, leaving about 1/2 cup behind.  Top with the shredded cheddar cheese and any remaining ingredients not rolled up into the enchiladas.

Bake 25-30 minutes or until the cheese is brown and bubbly.  Serve with sour cream and guacamole on the side, a recipe for which can be found here.