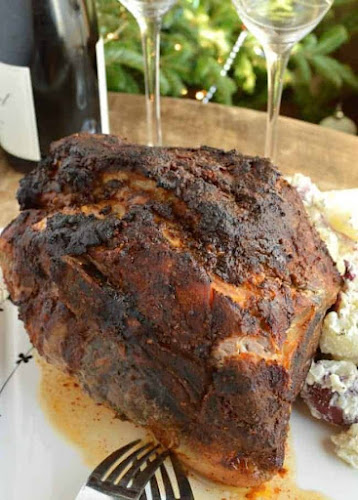 I have a bunch of pork roast recipes, a repository of which, including this one, can be found here.  In most cases, I am using what is referred to as a Boston Butt or pork blade roast, because the cut includes part of the animal’s shoulder blade.  It is also sometimes called a pork shoulder roast because it comes from a part of the hog above the front leg, but it is not actually part of the leg itself.   And neither is it from the back legs of a hog, in spite of calling it a Boston Butt.  The front legs of a hog are what is typically used in making ham, but I’ll occasionally see what is sometimes called a fresh ham, which confusingly is also sometimes called a picnic shoulder.  It has been neither cured nor smoked, so consequently, it isn’t yet a ham and it isn’t technically part of the hog’s shoulder, either.  But either the Boston Butt or a fresh ham (or picnic shoulder) would work with this recipe.  You can also sometimes find the Boston Butt boneless, generally tied up with butcher’s string, but a bone-in roast will yield more flavor.

I did a fair amount of research on the low-and slow-method, which is about the only way this cut of meat is ever barbecued or smoked. The advantage of cooking a pork roast in the oven this way is that it produces a more tender product because tough muscle fibers have time enough to gradually break down.  I must say that I agree with the results, but there is some debate about just how low low-and-slow really is.  Obviously, with a lower temperature, more time is required to cook the roast to the USDA recommended temperature of 165 degrees.

Based on what I researched, a roast cooking at 225 degrees (the temperature a lot of low-and-slow recipes call for) will require 75 to 90 minutes per pound.  I actually didn’t have that much time for my 7.94 pound roast on this occasion, so I estimated that at 300 degrees, I would need 60-70 minutes per pound and in fact, cooked mine for eight and a half hours, roundly 64 minutes per pound.  The results were fabulous.

In either case, the final step is to ramp up the oven to a very high temperature, exposing the fat side of the roast to the heat necessary to crisp it up before serving, about twenty minutes. This final application of high heat means you can forego the messy first step found in many pork roast recipes (including most of mine) of browning the roast on all sides on the stove top before putting it in the roasting pan.

This may well be my go-to pork butt recipe from now on, because it’s a “set it and forget it” approach with very little prep time.

The Recipe
Take the pork butt out of the refrigerator for two hours before cooking. Pre-heat the oven to 300 degrees.

Score the fat side of the roast in diamond shapes, cutting only into the fat cap, not the meat.

Combine the Dijon mustard, vinegar, wine, Herbs de Provence, Mrs. Dash seasoning and the olive oil to form a thick rubbing sauce.  Slather this all over the roast, on all sides, leaving the fat cap right side up, and do this as the roast is coming up to room temperature, which will give the meat a couple of hours to soak in the flavors.  Salt and pepper the roast liberally after applying the sauce.

Use a large roasting pan that will be deep enough to contain your
roast but give you clearance to seal it with aluminum foil.
Cut up your vegetables and after spraying the pan with non-stick cooking
spray, lay them in a single layer in the center of the pan.

Place the roast on top of the veggies and then pour the beef stock and wine around the roast.  Cap the roasting pan tightly with aluminum foil and set in the middle of your pre-heated 300 degree oven.

If you use a meat thermometer, be sure it isn’t touching the bone, and roast to a temperature of 160 degrees. I didn’t bother with it, however.  After 8-1/2 hours, I knew it was done.

Remove the roasting pan from the oven and leave it tented with the foil while your oven comes up to 450 degrees.  Remove the foil and place the roast back in the oven for 20 minutes to crisp up what’s left of the fat cap.

Take the roast out of the roasting pan and tent it with the aluminum foil for 15 minutes before carving.  It will be very tender and the meat will fall away from the bone.  Serve with mashed potatoes or cauliflower mock mashed “potatoes” (prepared according to my recipe found here, minus the garlic). Use the pan juices as a delicious gravy and the cooked vegetables are lagniappe.