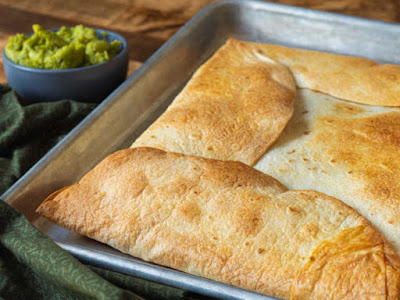 There are a bunch of online recipes for sheetpan quesadillas, and most of them are a form of oven-fried flour tortillas that have been filled foremost with cheese, and then folded on a sheet pan, topped by another sheet pan to apply pressure so the quesadilla seals during the baking process.  But there are only a couple of recipe discussions about the technique for actually folding the quesadilla itself.  With credit to My Number One Fan for having discovered The Pioneer Woman’s labor-saving version of this Mexican Food favorite, this recipe is more about her technique and less about her recipe, which we actually altered considerably.  That said, I’ll still give you my recipe and her credit for the technique.

Generally, the sheet pans you buy at the grocery store are flimsy, and so, I recommend you go with a true restaurant-quality sheet pan, which is made from 13-guage cast aluminum alloy.  But here’s the thing about The Pioneer Woman’s recipe (her name is Ree Drummond, by the way): she says to use “burrito-size” tortillas on a “half sheet pan.”  Already, I am confused.  I’m not sure what size is “burrito-size” and exactly what are the dimensions of a “half sheet pan”?

So, let me fix Ree’s lack of specificity.  First, it matters little how large a tortilla to use until you actually know the size of your sheet pan.  You want the diameter of the tortilla to be an easy multiple of the length of your sheet pan, and I’ll explain why in a minute.  First, about sheet pans: 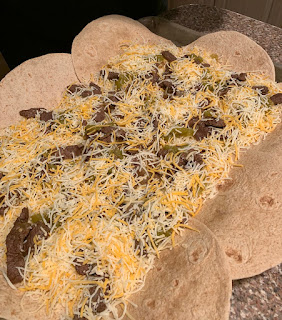 The general idea is to place the tortillas along the edge of the sheet pan with half the tortilla hanging over the lip; lay down all your ingredients; then, fold each tortilla inward over itself.  This picture gives you the idea.  But for this process to work easily, you need to do a little math.  My sheet pans are actually 16″ x 11-1/2″, which is not a standard shape in commercial cookware.  Tortillas generally come in three sizes, 6″, 8″ and 10″.  The latter is considered a “burrito-size.”

I used a 6″ tortilla and had some coverage problems.  Two along the longer side of my sheet pan wasn’t enough and three was too much. Thus, the need for using tortillas that have a diameter that will just accommodate the dimensions of the sheet pan.

Ree used 10″ tortillas on a 18″ x 13″ pan and had no coverage problems by putting two tortillas along each of the longer sides of the sheet pan, slightly overlapping, and only one on each of the shorter sides.  But if you don’t know the actual size of your sheet pan, her dictum of using 10″ tortillas might or might not work.

After you line the rim of the sheet pan with tortillas, you also will have to put a tortilla in the very center of the pan to ensure the bottom is totally covered.  Once you fold in the tortillas along the edges, you’ll put another tortilla in the center on top of it.

If this all reads too confusing, just get started with what you have and you’ll figure it out.

By the way, we used whole wheat tortillas because that’s what we had on hand, and is what we usually eat because of its lower glycemic index. You can certainly use white flour tortillas, but I do not think corn tortillas would work and they are not common to most quesadilla recipes in any event.

Over medium high heat, bring the olive oil to a shimmer in a skillet, and sauté the onions until they begin to caramelize.  Add the beef or chicken and saute until cooked, mixing in the teaspoon of taco seasonings at the beginning of the cooking process.

Remove the meat and onions from the heat and allow to drain well on paper towels.

Liberally spray the sheet pan with the non-stick cooking spray and then put down tortillas along the edges, overlapping them so that all edges of the sheet pan are covered, with half the tortillas resting outside the lip of the pan (as shown above in the photo). Put one tortilla in the center so that the bottom of your sheet pan is completely covered.

Cover the tortillas with half the shredded cheese.  Evenly distribute the meat and green chilies, and then sprinkle on the rest of the cheese.

Fold each tortilla in over itself, and put a tortilla on top of the one you have in the center.  All of your ingredients should now be covered.

Liberally, and I do mean liberally, brush the melted butter all over the tops of the tortillas.

Lightly spray the bottom of a second sheet pan with cooking spray, and lay it down on top of your tortillas.  Press down firmly and thoroughly.

Bake for about 25 minutes so that the tortillas become crispy and the cheese is melted.

Carefully lift the top sheet pan; stand by with a spatula to pry loose any bits that might have gotten stuck.

Use a pizza cutter to slice the quesadilla into squares.  Top with sliced avocado, cilantro and a quick squeeze of fresh lime.

Garnish with sour cream and salsa.