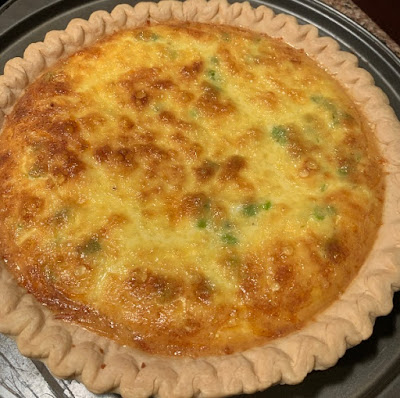 I posted a crustless version of Quiche Lorraine in 2017.  It’s a great dish and a wonderful low carb or Keto friendly recipe that approximates its more classic namesake, and can be found here.  But back in the late 1970s, my Number One Fan worked at the very first Houston’s Restaurant in Nashville, Tennessee.  By the late 1990s, there were over thirty Houston’s locations coast to coast and they never wavered from their commitment to quality food in a vibrant, trendy but comfortable atmosphere.  Since 2009, however, the parent company of the Houston’s brand has been slowly phasing it out by either re-branding or outright closing some locations, and today, there are only a dozen or so Houston’s left.

My Number One Fan managed to acquire a couple of recipes from the original Houston’s menu, including Canadian Beer Cheese Soup, found here, and this one for a genuine Quiche Lorraine.  I also was able to reverse-engineer a delightful aioli that Houston’s created and served with a smoked salmon appetizer, found here.  To date, that recipe is by far the most popular one downloaded and commented on in this blog.

This quiche recipe follows the more classic French culinary creation that evolved over time in the Alsace-Lorraine region between the 12th and 20th centuries,  but was commonly served on bread dough.  The flaky pie dough pastry idea didn’t come about until post WWII in the 1950s.  The classic Quiche Lorraine recipe features flavors of Gruyere cheese, onion, lardons (fatty bacon), and nutmeg, and has flaky pastry dough on both the top and bottom of the pie.  My Number One Fan elected to maintain the original Houston’s adaptation, which had only flaky pie dough on its bottom.  She used the kind of pie shell you buy frozen, already in an aluminum pie tin.

The Recipe
Pre-heat oven to 325 degrees.

Cut an “X” in the crust’s center, then prick the crust throughout with the tines of a dinner fork.

Bake the shell at 325 degrees for five minutes or until it loses its waxy appearance.

Cook the bacon until crisp and drain well on paper towels.

Mix the eggs and cream in a mixing bowl with a whisk until well blended.  Stir in the salt, pepper and nutmeg.

Layer the bacon, onions and cheese in that order in the pie shell.  Pour the egg and cream mixture into the shell.

Bake the quiche for one hour or until a knife inserted into its center comes out clean.  We needed an additional ten minutes at 350 degrees because our oven tends to cook on the cool side.

We served this with our recipe for a Waldorf Salad on the side, which married quite well together.  The recipe is found here.