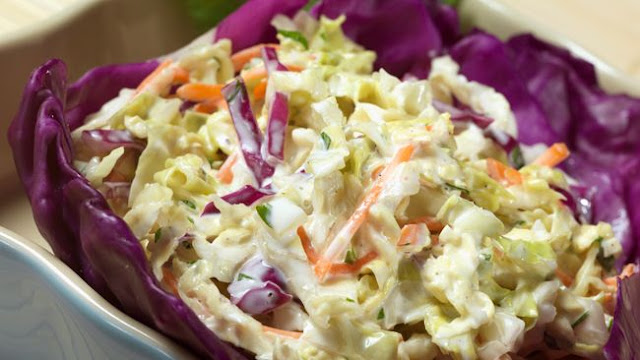 In our household, my Number One Fan is the Vice President of Cole Slaw.  I’m not sure why.  Maybe it’s because I never really made cole slaw before we met; I just bought it, usually at KFC or a neighborhood barbecue joint.  But restaurant prepared cole slaw and store-bought, too, will almost always contain sugar, something we try to eliminate from our diets. As a rule, my Number One Fan will mix a store-bought prepared cole slaw cabbage mix with Kraft mayonnaise (never Miracle Whip!), cider vinegar, malt vinegar, chopped green onions, celery seed and Mrs. Dash Garlic & Herb Seasoning Blend.  But on this occasion, she wanted to try something different and found this recipe, which was originally made with blue cheese and intended as a topping for a barbecued pork sandwich.

The recipe came from a website, ASouthernSoul but it turns out, the author ripped-off the recipe from Ina Garten of the Food Channel, and did so without any modifications.  We found the recipe too heavy on both kinds of mustards the recipe called for, and lacked chopped green onions which we think is essential to a good slaw.  So, as usual, we made adjustments to the ingredients and used Gorgonzola instead of blue cheese because that’s what we had on hand.

So, what’s the difference?

Blue cheese is used as the moniker in US culinary parlance for a variety of cheese that has been made from cow’s or sheep’s milk and heavily imbued with strains of the penicillium roqueforti or penicillium glaucum fungus that create the greenish blue veins giving this variety of cheese its distinctive appearance. And yes, this is the same mold in another form from which we derive the medication, penicillin.

What is mostly used in the US is Danish Blue Cheese made from cow’s milk, although Iowa is producing a style of blue cheese, called Maytag Blue Cheese, that has picked up considerable culinary esteem in the last couple of decades.  In France, they have Roquefort, made from sheep’s milk.  The British have Stilton, and the Italians have Gorgonzola.  There are actually over fifty varieties of blue cheese that are commercially produced in Switzerland, Finland, Sweden, Spain, Bulgaria and Canada, and probably hundreds more produced on a smaller, regional scale. It’s a popular variety of cheese. They are all considered in the category of blue cheese, but each has its own flavor profile and consistency. Arguably, Gorgonzola is among the mildest.

Incidentally, sometimes you might see “Bleu Cheese,” with the French spelling of the word “blue.”  This is strictly marketing to make you think you’re getting a French product when you’re not.  It was done in the early days of US blue cheese manufacturing to compete against Roquefort, which at that time dominated the market.

And where the heck did cole slaw derive its name, anyway? Today I learned it’s from a Dutch word, koolsla, which means “cabbage salad.”

By the way, store-bought packaged cole slaw mix takes a lot of work out of cutting up a head of cabbage.  It usually consists of cut green cabbage, with a little purple cabbage and shaved carrots for color.

The Recipe
In a mixing bowl, combine everything except the cabbage, Gorgonzola and black pepper, and mix thoroughly.

Put your cabbage or cole slaw mix into another mixing bowl.  Add the dressing a little at a time and toss to coat until you get the consistency you prefer.  Some people like their slaw wetter; others, drier.  This is the time to get it right, so don’t over pour the dressing into the cabbage mix.

Once you have your slaw the way you prefer it,  fold in the Gorgonzola at the end and add the freshly cracked black pepper. Toss again.

Allow to sit refrigerated for an hour or two before serving.  We did not use this as a topping for barbecued pork sandwiches, but as a side dish for some rotisserie chicken, and it livened up the meal quite nicely.