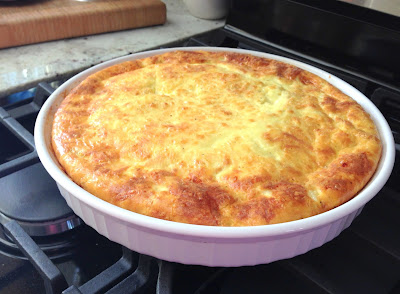 Maybe you’ll remember a time back in the late 1970’s and early 80’s when quiche was all the rage.  Restaurants of any caliber had their version of Quiche Lorraine on their menu and some restaurants wholly revolved around this dish, offering as many ingredient options as a pizza joint has toppings.  Quiche has been around at least since the eighteenth century, when it was named after the Lorraine region of France where household staples of cream, eggs and cheese were combined in a tart shell to create this light, airy, savory dish.  The quiche craze culminated with a 1982 book that practically ended it, “Real Men Don’t Eat Quiche,” a tongue-in-cheek expose about the evolving definition of masculinity.  Quiche went out of vogue shortly thereafter for a thirty-five year hiatus.

But now, it seems, quiche is making a comeback and My Number On Fan gets all of my accolades and recognition for finding and expertly preparing this crustless version on her very first attempt.  Found originally on kalynskitchen website, several modifications were made, and we were both impressed with how easily this came together.  We use a round 10-inch by 2-inch quiche baking dish, but any baking dish will do as long as the batter, when poured, is no more that about an inch and a half thick.

You could, if you were so inclined, make this recipe as a traditional crust version quiche by using a store-bought pie crust and following the directions to par-bake the crust, then carrying on with this recipe from there, but would likely have to increase your baking time by five minutes or so.

The Recipe
Preheat your oven to 350 degrees.

Beat the eggs using a whisk until well combined, then add the cream, white pepper, nutmeg, Mrs. Dash and the Nature’s Seasonings and whisk until all is well mixed.

Liberally spray a baking dish with the non-stick spray, then layer the chopped bacon, grated cheeses and green onion into your baking dish.

Pour the eggs and cream mixture into the baking dish and then shake the dish or use a fork to ensure all the ingredients are more or less evenly distributed throughout.  Bake in the center of a preheated 350-degree oven for about 40 minutes.

Start keeping an eye on the quiche at 35 minutes, but it should be done when it has expanded and beginning to brown on top, and when nothing in the center of the dish moves when you shake it.  If the center jiggles a bit when you shake the baking dish, that means the eggs have not cooked all the way through.  In any event, you should be done at about 40 minutes.

Let the quiche cool about five minutes before cutting it into to slices.  It will deflate a little, and that’s normal.  Garnish with the chives or green onions before serving.