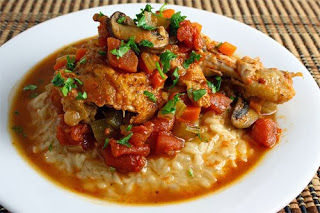 “Cacciatore” means “Hunter” in Italian, so Chicken Hunter-Style is what this original recipe was all about and in its traditional form, it is a time consuming dish to make.  Chicken pieces are dredged in flour and skillet fried, then placed in a stewing pot with tomatoes, mushrooms and herbs for a period of time until done, served with rice, pasta or even polenta.  In the South, this method of preparation would be called “smothered.”

My Number One Fan found this easy recipe made in a crock pot that requires no frying of the chicken ahead of time.  The recipe is from an unattributed website, but originally did not include mushrooms or green bell pepper, which I would add.  True Cacciatore traditionally contains mushrooms and very often, green bell pepper, although I suspect the latter was an Americanized addition when the dish became popular after WWII GIs returned home, having eaten the dish during and after the liberation of Italy.

In any event, this is one of those delicious winter dishes that you can assemble in the morning, cook all day, and come home from work to a hot, comforting and delicious meal.

The Recipe
Put onions and green bell pepper on the bottom of the crock pot.  Put the chicken pieces on top of the onions and peppers, and pour everything else in over the chicken. Stir well to ensure the herbs are mixed in and the chicken is completely submersed in the liquid.  Add more wine or some chicken stock if you need more liquid

Tip: especially if you’re leaving the crock pot unattended for the day, place a lipped sheet pan under it to catch any spillage that might bubble over while you’re gone.  Generally, this isn’t likely to happen if you’re cooking on low and provided you’ve left a 1-2 inch clearance at the top of the pot.

Here’s another tip when doing crock pot cooking:  Fill the ceramic insert with very hot water and allow it to warm up before putting in all your ingredients, which are likely to have been refrigerated.  This will allow the vessel to come up to cooking temperature a little quicker.

Cover and cook on low eight hours or on high for 4-5 hours.  Remove bay leaves, then serve over rice, pasta or with creamy or fried polenta.