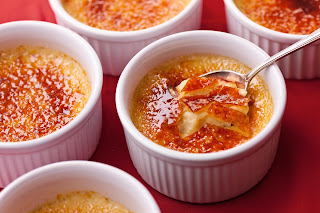 I first made this recipe in the 90’s for a holiday dinner party.  I don’t remember where I got it, but I was surprised at how simple it was to make this very classic and classy dessert.  I followed the recipe to the letter and the product came out flawless.  I decided to recreate this dish for a family holiday treat this year. Whoever you were that gave me this recipe, thank you for sharing.  This was originally called “Tahitian Vanilla Crème Brûlée” which honestly is just a bit of marketing hype.  Unless you’re, like, really into vanilla, you won’t have much choice over where it comes from.  The most famous types are Bourbon and Tahitian vanilla.  Bourbon vanilla is regarded as the best vanilla by many food connoisseurs and is the vanilla found in the ‘Bourbon’ islands, namely Comoros, Seychelles, Reunion and mostly famously, Madagascar.  But a good deal of vanilla today comes from Mexico, India and China.

Regardless, when you buy vanilla extract, be sure it says just that.  Don’t get “vanilla flavored” extract.  This is a vastly inferior product.  While they are expense, buy some real, whole vanilla beans.  You can use the whole bean as is suggested in this recipe, or do what I actually did, which is to split the bean open with a sharp knife and scrape out the little vanilla seeds.  This will put specks of vanilla into your Crème Brûlée, giving it a more authentic flavor, in my opinion.

Crème Brûlée means burnt cream, and the dish is so called because of the caramelized sugar on top when served.  You can caramelize the sugar under the broiler or with a kitchen blowtorch if you just happen to have one lying around.

The Recipe
Heat 1/2 of the Half & Half over medium high heat with the vanilla bean and the vanilla extract.  Bring to just under a simmer and keep a watchful eye.  If left un-managed, it will quickly boil over and make a huge mess on your stove top.  The liquid should be steaming hot, but not bubbling.

In a separate mixing bowl, whisk the whole egg, egg yolks and the sugar together until smooth and well blended.

Pour a small amount of the hot Half & Half into the egg mixture to temper the eggs, whisking constantly.  Continue to do this until all of the Half & Half has been added to the mixing bowl.   Then, add the remaining Half & Half and the heavy cream, whisking well to combine.  Allow to cool completely.

Remove the ramekins from the water bath and allow them to cool completely.  Sprinkle sugar over the surface of each Crème Brûlée and using your oven’s broiler or a kitchen blowtorch, bring the sugar to a browned and bubbly state, and thoroughly caramelized.  Serve with a berry or two as garnish.