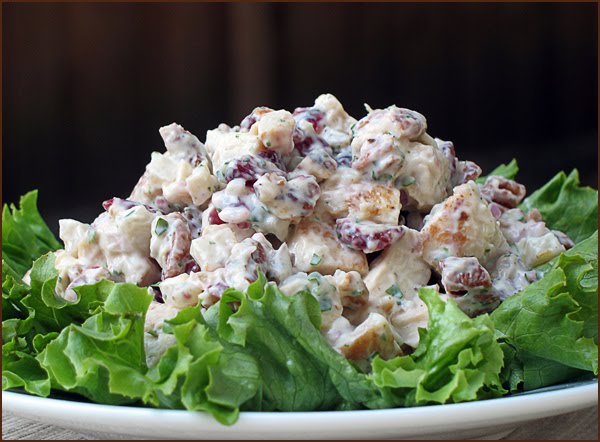 Like many so-called classic recipes, chicken salad and its origins are debatable.  The current narrative is that chicken salad came about after the invention of mayonnaise, which food historians place sometime in the early eighteenth century in France.  Etymology of the name is obscure but some believe it originated from the provincial French town of Mahon.  It is a historical fact, however, that the first printed use of the word “mayonnaise” in English occurred in 1815.  Sometime thereafter, the idea of mixing mayo with cold meat or seafood came about with the first printed recipe for Chicken Salad which occurred in 1847 from a cookbook called The Carolina Housewife. The author’s recipe was more about how to make mayonnaise from scratch before adding it to chopped chicken combined with white celery.

Purportedly, the first commercially prepared chicken salad arrived on the U.S. culinary scene in 1863 in Rhode Island at a butcher shop, later turned into a delicatessen, in the city of Wakefield. Leftover cooked chicken was mixed with mayonnaise, tarragon and grapes.  It wouldn’t be until mayonnaise became commercially available in the early twentieth century in New York City by the Hellman family in 1912, which later became trademarked as Hellman’s Mayonnaise in 1926, that chicken salad began gracing the tables and lunch counters of America.

Today, limitless variations of ingredients in chicken salad can be found on the Internet, some without mayonnaise, but the most popular and widely used recipes for chicken salad contain the cornerstone three ingredients of the original 1847 recipe, namely, chicken, mayonnaise and celery.  Other common add-ins are green onions, boiled egg, bell peppers and pickles or pickle relish.  And grapes.  Many recipes still tip their hat to the Town Meats Butcher Shop in Wakefield, Rhode Island that began the trend.

Mine is a simple Chicken Salad recipe without grapes, which I personally don’t care for in what otherwise should be a savory salad.  This dish goes well stuffed in a tomato, atop a half of a ripe avocado, in-between two slices of multi-grain bread, on crackers or just by itself on a bed of crisp, cold lettuce.  Add grapes, cut in half, if you want them.

My Number One Fan has contributed her version of Chicken Salad which does not contain grapes, either, but does have hard boiled eggs, a more common recipe in the South.  Her personal twist on the recipe was the addition of capers, which isn’t traditional in the South, but is certainly delicious.

By the way, you can use any part of the chicken you want, once cooked, skinned and de-boned.  More popular and arguably easier to use are chicken breasts, but we prefer chicken thighs.