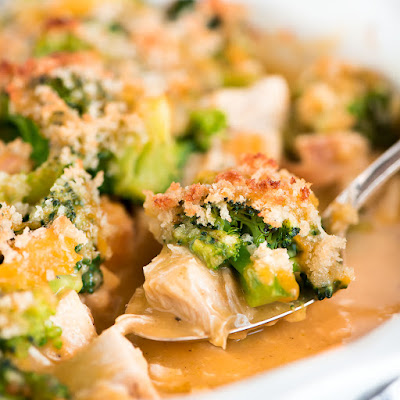 No one will ever be able to truthfully use the adjectives of “Original”, “Classic” or “Traditional” with their recipe for Chicken Divan because the chef that created it took his recipe to the grave. The dish’s origins are vague; some say it came from the 1930s; others say the ’40s and it may well have. Who’s to say exactly when the chef created the recipe?  But for sure, it rose to prominence in the early 1950s and the Divan Parisian Restaurant in New York City’s Chatham Hotel is credited with its introduction under the name we now call it. It is thought that the dish originally wasn’t a casserole at all, but consisted of slices of roasted chicken breasts over steamed broccoli with a sauce comprised of Bechamel, Hollandaise and sherry, and topped with Parmesan cheese, which was then broiled.

Because the original recipe was not known, however, foodies in the 1950s sought to create their own versions which eventually evolved into a casserole. Chicken Divan or many versions of it, became wildly popular by the time 1960 came around.  It’s easy to see why.  Frozen vegetables, like broccoli, were in vogue and readily available; canned soups were a staple in almost every American household food pantry; and casseroles were all the rage for busy families and an ever increasing number of working mothers.

Today, Chicken Divan recipes are all over the Internet and lack any consensus as to what truly constitutes the recipe. The basic requirements that seem to have the greatest favor are boneless chicken, broccoli florets and cheese in some kind of creamy sauce most assuredly based on cans of condensed cream soup, served as a casserole, and topped with bread crumbs, crumbled butter crackers or in this case, crushed potato chips.  Somehow, the latter gives a more authentic ’50s presentation, and besides, it’s the way my mom made the dish.

My mother’s recipe for Chicken Divan, however, is as lost to time as the original chef’s, so I got most of my inspiration from the Paula Deen website (but certainly not without my own modifications).  This recipe will easily serve six to eight people, so dial back the ingredients if you want less or are adversed to leftovers.

The easiest way to acquire your chicken for this recipe is to buy a grocery store’s prepared rotisserie chicken a day ahead of time, refrigerate it, then de-bone it cold and shred the meat as you go.  One bird will yield about three cups of chicken.

Incidentally, the Internet rages with debate as to whether you should use fresh or frozen broccoli. I’m of the opinion that fresh broccoli is more work that doesn’t yield a significant return on the investment.  Frozen is far easier and in the end, there would be little if any difference in taste or texture.

And yes, this is another “can-o-dis” recipe.  Food snobs beware.

The Recipe
Preheat the oven to 375 degrees.

Microwave the broccoli florets until thawed. Then, drain thoroughly.  Dab with paper towels to remove any excess water.

In a large mixing bowl, combine the condensed mushroom soup, mayonnaise, sherry or white wine, lemon juice, curry powder, salt and pepper and one cup of the grated cheddar cheese.  Whisk together to make a sauce.  Toss the shredded chicken in the bowl and combine until the chicken is well coated.

In a casserole dish large enough to accommodate the ingredients (at least 11″ x 7″), treat with non-stick spray and lay out the broccoli in a single layer.

Add the chicken and sauce on top of the broccoli and pat down the top until level.  Top with the Gruyere and remaining cup of cheddar cheese, then top evenly with the crushed potato chips.

Bake 50 minutes to an hour until the cheese has melted and the top of the casserole is browned and bubbly.