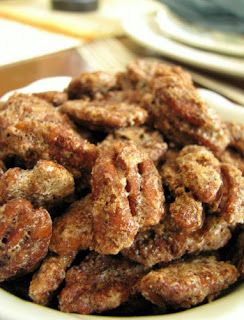 One of my early recipes in 2009 was for a savory snack that I made as holiday gifts that I called Barbecued Pecans.  It was a very involved, albeit delicious recipe that required preparing both a wet and dry spice application, and the pecans were roasted in the oven.  It’s a great recipe, but almost put me off toward finding a simpler way to produce candied pecans as a salad ingredient for a recent meal.  I simply didn’t have the energy or the time for a protracted cooking event for a single ingredient.  I was about ready to give up on the idea after looking at various recipes on the Internet, as they all were fairly involved and required roasting the pecans in the oven.  Luckily, I found this version from the food.com website, and it took all of about 15 minutes to make.

The trick here is simplicity of ingredients and a stove-top heat application.  I was amazed at how good they came out.  The recipe is modifiable by adding a sprinkle of cinnamon or even a dusting of table sugar after the pecans are laid out on wax paper to cool.  One could experiment further by using cookie sprinkles for color as an added visual and flavorful element.  Regardless, these went very well with a warm salad I made using escarole lettuce and oven-fried parsnips.  I still have a Tupperware full of them in the pantry, awaiting their next calling, but I must confess to snacking on a handful or two just as they are.

The Recipe
Melt butter in a skillet over medium-high heat. Add the pecans and toss to coat.

Add sugar and whipping cream. Stir constantly until the pecans darken slightly and begin to caramelize, about 5-7 minutes.  Be careful not to burn the pecans or the sugar mixture.  Lower the heat if necessary.  The pecans will become less moist and stickier over time.

When done, turn the pan contents out onto enough wax paper for the pecans to be spread out into a single layer, and allow to cool for an hour.  Put in an air tight container and leave un-refrigerated for storage. If additional sugar or other spices are desired, sprinkle on the pecans as soon as the come out of the oven before they cool and harden.

These are a great snack, but are versatile enough to be a topper on desserts or an ingredient in salads.