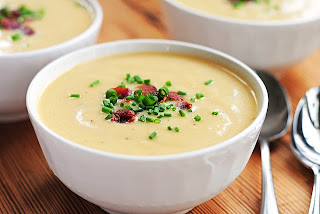 This is a recipe from the original Houston’s Restaurant menu when they first got started in the late seventies.  My Number One Fan has had this recipe in her recipe book for over 25 years and we probably shouldn’t talk about how she actually got it, which at the time was a closely guarded secret.  Of course, the original recipe was written for a commercial kitchen, so this has been dialed back to make for a dutch-oven quantity of soup, which is still a lot.  You could cut the quantities in half and still be okay for a hearty meal with leftovers. The original Houston’s Restaurant menu had beer in its cheese soup, which was was later omitted.  This version is as close to the original 1977 version as we could make it. By the way, this recipe calls for Kraft Velveeta.  Yes, Velveeta.  Don’t be a snob.

The Recipe
Over medium high heat, melt butter in a dutch-oven.  Add the carrot, onion and celery, known in French culinary terms as a Mirepoix, and sauté until soft and wilted, but not browned, about 15 minutes.

Add flour to the vegetables and stir until a roux has formed.  Add chicken stock and bring the liquid to a simmer while whisking constantly until a thick syrup is formed and the roux has dissolved.

Turn the heat down to medium and add the Half & Half while whisking, being careful not to let it boil.

Break the Velveeta into pieces and add slowly, stirring the whole time so the cheese does not stick to the bottom of the vessel.

When the cheese has melted and the mixture is close to boiling, remove it from the heat and add the bottle of beer.  Stir well and allow the soup to sit for ten minutes or so, then serve. Alcohol evaporates at 170 degrees, so allowing the soup to sit for a minute will assure most of the alcohol is gone.  You could still return the soup to the stove and keep just below the simmer until ready to serve.

Top with crumbled bacon and chives or the finely chopped tops of green onions.