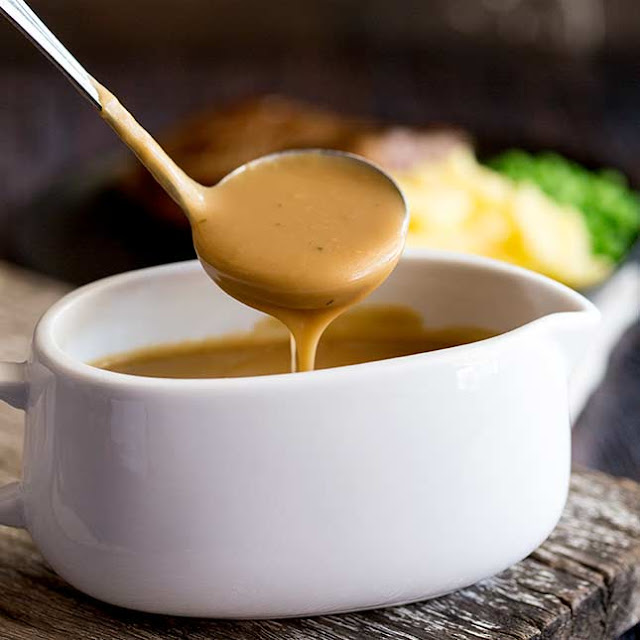 Making gravy is really very simple, so simple in fact that one wonders why use those ghastly concoctions that come in cans and a jars that calls itself “gravy.”  I will admit that I’m not above using an envelope of dried gravy mix once in awhile, but only as a flavor enhancer to scratch-made gravy with real pan drippings.  But what if you have no pan drippings?  What if you, say, have some leftover meatloaf that really needs some pepping-up, like I did last evening?

This is an amalgamation of a half-dozen brown gravy recipes I researched on the Internet, and as usual there were very wide adaptations of what should be a pretty simple sauce.  I decided early on that I needed a base of beef stock, not broth, and I would use flour as a thickening agent, not corn starch.

Beyond those two non-negotiable ingredients, I knew I would have to lift the flavor by adding beef bouillon.  I started out just using an old standby, Kitchen Bouquet, but ultimately needed a richer kick to get the right balance of savoriness that I was looking for.  So, I added a large dollop of Better Than Bouillon Roasted Beef Base.  This recipe worked out well and definitely made leftover meatloaf a much more palatable treat for Sunday dinner.

The Recipe
In a saucepan over medium heat, melt the butter, then blend in the flour with a whisk to make a roux. Stir constantly for five minutes until the roux begins to turn light brown.

Slowly whisk in the beef broth, stirring constantly until the roux is well blended into the stock.

Add all remaining ingredients except the heavy cream.  Stir periodically to keep the gravy from sticking to the bottom of the pan.  Bring to a very light simmer and continue stirring until the gravy thickens to evenly coat the back of a spoon.

Add the cream and whisk the gravy until it returns to a simmer.  Make a final check for seasoning and serve immediately.