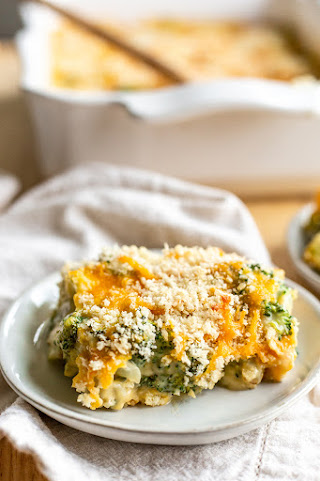 It seems I’ve been on something of a casserole kick lately.  I find it strangely relaxing to expend effort preparing a recipe on the front-end, and then reclining for 45 minutes to an hour sipping a dry martini waiting for the final verdict to come out of the oven.  It’s also a great way to revitalize leftovers, in this case, as an accompaniment to my Meatloaf in a Minute recipe, which I had additionally enrobed in thin slices of pancetta.  This simple casserole made the leftover meatloaf seem like a different meal.

I had an idea of how to make a broccoli cheese casserole, of course. Even though this was my first attempt at preparing it, I’ve eaten it many times.  In fact, I’m not much of a fan of broccoli on its own and I’m also willing to bet that mothers a long time ago found that combining cheese with this edible green plant from the cabbage family was about the only way they were going to get their kids to eat their vegetables.

I decided to do some research, however, and wasn’t surprised that there are thousands of recipes on the Internet for this popular American casserole.  Some were ridiculously simple, like one that combined a package of frozen broccoli with a jar of Cheez Whiz.  Actually, that sounded good.

Others were more complex and some, overly so, as with many food bloggers these days, like one that made a roux and used fresh eggs. Most recipes were far less complicated, but they were all over the board in terms of their ingredients. Some used cheddar cheese, others Velveeta; some used sour cream, some heavy cream and others, mayonnaise.  Some added seasonings like Dijon mustard.  A few added bacon.  Almost all, except those that were attempting to remain low carb, used a buttery cracker topping but even then, the variables were many, like Ritz crackers versus Waverly Wafers versus Keebler Club Crackers. There was even a lack of consensus on the broccoli itself: some attested to using only fresh; others said frozen was just fine.

Here are the basics: broccoli, yellow cheese, a dairy binding agent, and a cracker crumb topping; seasonings are optional.

I took the best of what I found on the Internet and in some cases combined them.  For example, I only had one small crown of fresh broccoli, so I augmented with a 12.6 oz bag of frozen broccoli florets.  You know what?  There was zero difference between the two.  The only variable was that the frozen florets had to sit in boiling water for two minutes longer.  After that, you couldn’t tell the difference between fresh or frozen in color, texture or flavor.  My Number One Fan won that debate.

I couldn’t decide if Velveeta would be better than cheddar, so I used both.  Ditto on heavy cream versus sour cream.  And while I discounted a heavy flavoring agent like Dijon mustard, I thought some Italian seasonings and a little crumbled bacon were good ideas, and they were.

Like any creative cook, I used what I had on hand.  I had about a quarter-cup of shredded Romano cheese and another quarter-cup of shredded Gruyere cheese in the fridge, so they found their way into the mix.  The results were quite good, so I’ve added them to this recipe, and provide alternatives in case you don’t happen to have the Romano and Gruyere just lying around waited to be re-purposed.

Finally, I used Townhouse crackers for the topping because that’s what was in our pantry, but concede that any of the aforementioned savory crackers would work just as well.  The trick is in properly crumbling them and dousing them with melted butter.

The Recipe
For the quantity of broccoli you need and if you’re using fresh, it obviously depends on the size of the crown. Three small or two large should do it. Or use two 12.6 oz bags of frozen broccoli florets (like, Green Giant or Birdseye). I find it strange that 12.6 ounces seems to be an industry standard wight for frozen broccoli. Go figure.

For the bacon, you can go to the trouble of dicing 2-3 strips of bacon and frying them.  Or you could use the microwave variety.  If you want total convenience, which I did, use Hormel Black Label real crumbled bacon sold in small plastic pouches.  Oscar Mayer makes something similar. Make sure you see “real” on the label and that bacon is in fact the first item listed in the ingredients.  Whatever you do, don’t use those awful things called “bac’n flavored bits” which are made of textured soy flour and contain no bacon.  You want just a touch of bacon in this recipe, so don’t get carried away with quantity.

Bring a soup pot or Dutch oven 3/4 filled with water and 4 tbsp of salt to a rapid boil over high heat. Add the broccoli and once the water returns to a boil, cook 3 minutes if fresh or 5 minutes if frozen. Drain well through a colander and put the florets in a large mixing bowl with enough room in a single layer to steam-dry for ten minutes while you make the cheese sauce.

Using the same pot after draining the broccoli  (to make use of its residual heat), add the cream over medium heat until it begins to simmer.  Add the Velveeta and stir constantly as it melts. Add the sour cream, the Gruyere and Romano cheeses and continue to stir while all blends in. Add the Italian seasoning, garlic powder, sea salt and Cayenne pepper. Lastly, add the bacon.

In a large mixing bowl, pour the cheese mixture all over the broccoli and use a folding motion to carefully coat all the florets, being careful not to masticate the veggies.

Liberally spray a 9″ x 13″ baking dish with non-stick cooking spray, and then pour in and level off the mixture.

For the topping – and, carbs be damned, but I cannot over-emphasize that you don’t skip the topping – put the crackers in a zip-lock bag. Leave a small part of the bag unzipped to allow air to escape.  Use a rolling pin to smash the crumbs finely.  If you don’t have a rolling pin, use a can of something from your pantry.  Don’t pulverize the crackers to a powder, but you don’t want any large chunks, either.  Once crumbled, put the cracker crumbs in a small bowl and douse with the melted butter,   Stir until the breading soaks up all the butter.

Place the casserole in the oven and bake for 50-60 minutes until it’s bubbling, the cheese is melted and the crumbs are slightly browned.