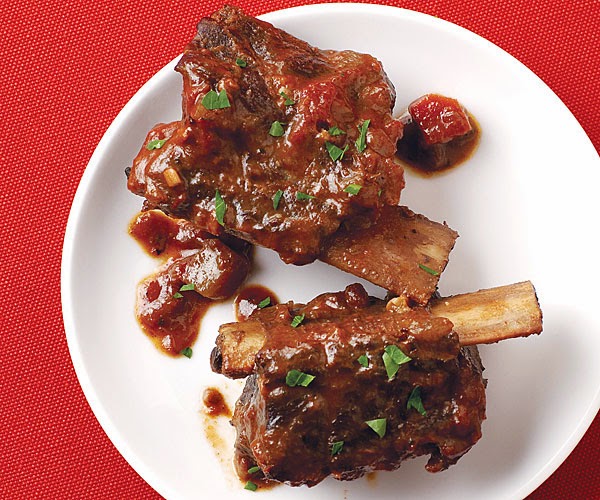 This another short rib recipe from the Pioneer Woman website.  Short Ribs are good dinner fare; the aroma of them simmering away in a rich broth, filling the house on a lazy Sunday afternoon is the stuff of culinary legend.  I’ve adapted several short rib recipes into my Kitchen Tapestry, including Beef Short Ribs & Tomato Ragoût, Slow Cooked Beef Short Ribs and Korean Style Short Rib Tacos with Cucumber Slaw.  The first of these was also a Pioneer Woman recipe before its author became a well known celebrity chef on the Cooking Channel.  She reveres beef ribs highly and for good reason.  They are sublime and generally very easy to cook.  Braising is the preferred method, which means cooking in liquid.

This recipe is very simple to make.  You can spoon off the fat before serving over a bowl of creamy, cheesy Parmesan grits like I did, or you can put the gravy in a container, let it sit in the refrigerator overnight and then just simply pull off the fat cap that developed while the liquid settled and cooled.  This recipe would be delicious over noodles, corn bread, polenta (which is how the Pioneer Woman served them, with goat cheese), or just all by themselves.

Pioneer Woman tends to complicate some of her recipes, I suppose because her website is as much about photography as it is about food.  For example, she advises the reader to salt, pepper and flour each rib individually.  I advise to throw everything in a plastic zip-lock bag and shake the hell out of it.  As another example, she advises the reader to dice three whole carrots.  I bought the packaged pre-shredded  kind and ran a knife through them to whack them down to size.  She further used fresh herbs; I used dry. Cooking should be a joy, not a chore.

The Recipe
Put the salt, pepper and flour in a large zip-lock bag, throw in the ribs and shake to coat.

Over medium heat in a large dutch oven, cook the bacon or pancetta until crispy and all the fat has rendered.  Remove the pork with a slotted spoon and set aside.

Add the olive oil to the pan with the pancetta or bacon fat and brown the ribs, about a minute on each side.  Do this in batches depending on the size of your dutch oven so that you do not crowd them in more than a single layer.  Leaving plenty of room in-between the ribs as you brown them allows you to more easily turn them.  Remove the ribs from the pan and set aside.

Add more oil if needed.  Toss in the carrots, onion and shallots.  Saute until the onions begin to take on a little color, about five minutes.

Add the wine, beef broth, thyme, rosemary and the cooked pancetta or bacon and bring to a boil for a couple of minutes, then add the ribs back to the liquid.  They should be completely submerged.

Put the lid on your dutch oven, and put into a 350 degree oven for two hours, then reduce the temperature to 325 degrees for an hour more.

Remove the ribs to a platter, cover with foil and put back into a warm oven for 20-30 minutes while the gravy settles.  Spoon off the grease after it rises to the surface.

Serve your ribs on grits, noodles, polenta, corn bread or rice with some of the gravy spooned over top.