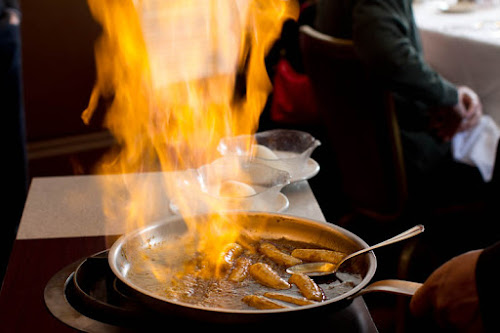 I made this over the holidays for some dinner guests and forgot about posting it.  It’s an easy recipe that I made hundreds of times when I was a Maître d’ at a swank hotel restaurant in the ’70s where I also engaged in tableside preparations of Steak au Poivre, the recipe of which can be found here, Caesar’s Salad,  found here, and Wilted Spinach Salad, here. The latter provides a bit more detail on the whole concept of tableside cooking and fine dining.

One of the steps in this recipe (which can be omitted) is to flambé it.  That’s a dangerous step and you can hurt yourself or worse if you’re not paying attention and exercising extreme caution.

The recipe originated at Brennan’s Restaurant in New Orleans in 1951.  It is named after Richard Foster, a good customer of Brennan’s and personal friend of the restaurant’s founder, Owen Brennan.  Richard and Owen also served together on a civic board that had been created to clean up and improve the reputation of the French Quarter, called the New Orleans Crime Commission.  Besides crime, New Orleans was also known as the entry point for imported bananas from Latin America in the ’50s and this dish was created for a magazine article about the restaurant. Owen wanted to promote the newfangled fruit for the article and challenged his chef, Paul Blangé, to create something with bananas.  The rest, as they say, is history.

You can skip the flambé part if you want to, but the drama is in the presentation, rather than the ingredients, which are few and simple.  It does prove a culinary point, though: you can make anything taste great if you put enough butter, sugar and alcohol in it, so remember that, even if you do not like bananas.

If you are going to flambé the dish, do not use a skillet with a non-stick surface.  I really recommend your trusty cast iron skillet since it is not likely you will have a restaurant-quality flambé pan lying around your kitchen cabinets.  This is a recipe for four people.

4 bananas, peeled and cut in half lengthwise, then halved

Over medium low heat, melt the butter in a cast iron skillet.  Add the brown sugar and cinnamon, and stir until the sugar melts and becomes bubbly, a couple of minutes.

Remove the pan from the stove and carefully add the banana liqueur.  It has a relatively low alcohol level, but it can still catch fire.  Add the bananas to the mixture and return the pan to the stove.

Cook for about three minute until the bananas soften and begin to brown.

Remove the pan from the stove again, and carefully add the rum.  Return the pan to your stove and using a stick lighter, stand back and ignite the rum.  It will catch fire in a burst and the flames will likely rise two feet above the pan, so be careful.  You can turn the heat off on your stove at this point.

If you do not wish to flambé the dish, forego lighting it, and just allow the sauce to simmer for about three minutes.  This is easier done on an electric stove.  If you’re cooking on a gas burner, the mixture may very well ignite on its own, so I’d recommend lighting the alcohol under your supervision so you have better control over it.

Allow the flames to subside, which will take a minute or so, and serve four pieces of banana per scoop of vanilla ice cream.  Spoon the sauce liberally over each serving and serve immediately.

While I’m at it, do you have a fire extinguisher
readily available in your kitchen, the kind intended for use on a grease
fire?  No?  Go get one, dammit, and check it periodically to make sure
it’s in date.  You can generally find these at the grocery store or
certainly at a hardware retailer.