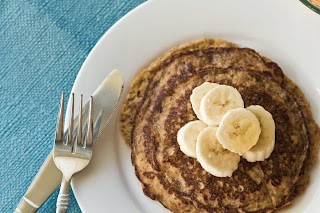 So, all the rage in dieting these days is something call the Paleo diet, or the so-called Caveman diet.  The theme essentially is to avoid all grains and gluten products, eating as we did when we were hunter gatherers before we became agrarian societies.  It’s a new twist on an old theme, essentially to avoid starchy, carb-ladened foods and in particular foods like the ubiquitous wheat flour.  I avoided using the “Paleo” moniker for this recipe so as to not infringe on anyone’s copyright, but Banana Pancakes might imply these are traditional flour-based pancakes with bananas in them.  They are not.  The ingredients are simple.  The technique for preparation is a bit trickier. This recipe came from the civilizedcavemancooking.com website.

The dish also requires a nut butter using something other than peanut butter, however, I think peanut butter would probably work fine and if you did use peanut butter, I suppose you could call these Elvis Pancakes in honor of the rocker’s affinity for eating peanut butter and banana sandwiches.  Most recipes I’ve seen on the Internet suggest almond butter.  I personally think cashew butter might be fantastic, but for this occasion, I bought Justin’s Maple Almond Butter, which you can look over by clicking here. He has several different flavors of almond butter, hazelnut butter and traditional peanut butter.

The Recipe
Place the bananas, eggs, almond butter and cinnamon in a food processor and blend well until you have a more or less consistent batter.

Pour the batter into the pan or onto the griddle enough to make a three to four inch wide pancake.  Cook 2-3 minutes. When bubbles form, flip the pancake over with a spatula large enough to cover the whole pancake because they are fragile. The trick is to not try and flip them too early.  Be patient.

After flipping, the pancake will finish pretty quickly in about two minutes.  Don’t overcrowd the pan or your griddle surface so you have plenty of room to flip the pancake. This recipe makes three cups of batter and each cup yields 4 pancakes or maybe a little more.  I got fourteen pancakes all totaled, but was a little inconsistent on the pancake size.  I encourage you to err on the side of a pancake too small rather than too large.

Serve warm with butter and syrup if desired (in keeping with a good carb approach to this meal, I used sugar-free maple flavored syrup).  This really is a great recipe and to whomever figured this out, my compliments.