An Alliteration of Pears 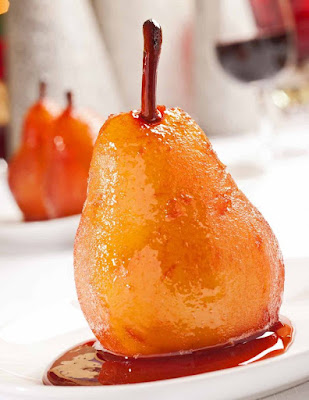 You remember learning what alliteration is, don’t you?  It’s the occurrence of the same letter or sound at the beginning of adjacent or closely connected words.  I came up with this recipe on a lark for a Christmas Dinner that included my Apricot Brandy Glazed Cornish Game Hens with Wild Rice Casserole, and this dessert was, in fact, an alliteration that had us all chuckling around the dinner table as we attempted to continue the joke: Poached Pears in Port Wine with Pistachio Ice Cream.  Think “Peter Piper picked a peck of pickled peppers,” and you get the idea.  At one point, I was papa poaching pears in port wine with pistachios ice cream, perched on the porch, puffing a puro, while drinking a potable potion.  And yes, we were all drinking alcohol at the time.

Truth be told, I had fully intended on making my own pistachio ice cream with a twenty year old Braun ice cream maker that I have sitting untouched on a cabinet shelf high above my refrigerator.  But I was short on time and feeling the pressure to get on with prepping dinner for some special family guests in our home for the holiday.  That, plus, my neighborhood grocer carried Ben and Jerry’s “Pistachio-Pistachio” Ice Cream, and I realized mine probably wasn’t going to be any better.  Nevertheless, I am including the recipe I was going to use, with thanks to the Life Made Simple website that it came from.

This dish is devilishly simple, but it requires about two hours of cooking time. It can, however, be made many hours ahead of serving.  The key is to reduce the poaching liquid to mere tablespoons of thick, delicious syrup, plus additional time to allow the syrup to cool, which will further thicken it.

As simple as it is, it is very elegant, and the addition of two or three 2-ounce scoops of pistachio ice cream elevates it to the sublime.

The Recipe
Cut the bottom 1/8 inch off the pear so that it will not fall over when you stand it up on a plate.  Using a vegetable peeler, peel the pear, being sure to leave the top stem intact.

In a sauce pan large enough to accommodate the pears (they will float in the poaching liquid), add the port wine, water and sugar, then stir well so the sugar as completely dissolved.  Add the lemon peel, orange peel and cinnamon stick, then dunk the pears in the liquid.

Bring the liquid to a slow, rolling simmer, and cook for an hour.  Turn the pears over every once in awhile to ensure even cooking throughout.

After an hour, remove the pears from the poaching liquid, and stand them up on a platter, allowing them to drain and cool.  They can remain there throughout the day until you’re ready to serve them, and taste best when served at room temperature.

Remove the cinnamon stick, and bring the poaching liquid to a rolling boil.  Reduce the liquid until you have about 1/8 to 1/4 cup of liquid left.  This will take 45 minutes to an hour.

Remove the sauce pan from the stove and allow it to cool completely.  The liquid, now a sweet syrup, will thicken as it cools.  Once the syrup has completely cooled, you can cover the sauce pan until you are ready to serve the dish.

To serve, stand the pear up on a dessert plate, and drizzle the syrup over and around the pear.  Serve with two or three 2-ounce scoops of pistachio ice cream, the recipe for which follows.  Or, do what I did, and serve with a premium store-bought brand like Ben and Jerry’s.

Again, the ice cream recipe I am posting has been untested with thanks to the Life Made Simple website, which I find amusing since I believe that recipe was unnecessarily complicated, requiring you to strain the mixture mid-way through the process.  Unless I’m missing something, I saw no added value in going to that kind of trouble and have omitted it from the recipe I had planned to follow.  Sometime in the next decade or so, I’ll actually make this recipe for pistachio ice cream and if I find that not straining the mixture halfway through the recipe somehow detracts from it, I’ll come back and edit this.  Promise.

The Recipe
In a saucepan bring the milk, cream and half of the sugar to a boil over medium high heat.  Take care to stir often so the milk and cream do not scald.

In a food processor, grind half of the pistachios along with the rest of the sugar until finely ground, but not to the point that you’re making pistachio butter. Put this into the milk mixture, and allow it to continue heating to a boil, whisking every minute or so.

In a medium size mixing bowl, lightly beat the whole eggs and egg yolks. Temper the eggs by gradually pouring a cup or so of the hot milk/pistachio mixture in, whisking vigorously to prevent the eggs from scrambling. Then, gradually add the egg mixture in a slow, steady stream back into the saucepan while whisking all the while.

Reduce the heat to medium low and from this point on, you do not want to boil it.  It should be just below a simmer.  Cook over low heat, stirring occasionally with a rubber spatula, until it thickens to coat the back of a spoon that will remain in place when you run your finger through it.  This will take 5-10 minutes or so.

Add the almond and vanilla extracts, then transfer the mixture to a covered container and refrigerate for at least 2 hours, but more is better and overnight would be best.

When the mixture is cold, pour into an ice cream machine and freeze according to the manufacturer’s instructions, which will probably take 20-30 minutes. When the ice cream is firm, coarsely chop the remaining pistachios and fold them into the ice cream. Place in a freezer-safe container and chill for 3-4 hours before serving.