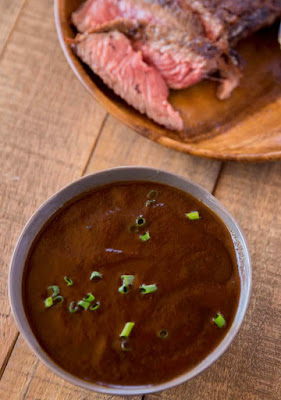 This started as a copycat recipe for A-1 Steak Sauce.  You can search the internet and find the recipe everywhere and all are identical.  But I don’t really understand the need to make something identical to a sauce that is readily available, both in the grocery store and in my pantry.  We’re never without it and find enumerable uses for it, mostly with serving on leftover steak or with hamburger sauteed with yellow onions until caramelized.

Since we were celebrating New Year’s Eve last night, I had a lovely Prime beef filet, which I seared in butter and olive oil,  Then, I toasted up some slices of a crusty baguette of French bread slathered with butter.  I spooned this delicious sauce over the slices of toasted bread, and laid the juicy slices of tenderloin on top.  It made for a fabulous Bruschetta that had to be eaten with knife and fork.  It served as our evening’s entree, but could just as easily been a hearty appetizer.

I declared my sauce Alpha-Uno as a nod to the inspiration of A-1, but made modifications to the copycat recipe.  For one thing, I didn’t have raisins, which is in the original recipe, so I added a sweet Madeira wine.  Secondly, I used shallots instead of white onions called for in the original recipe.  Finally, I didn’t strain the sauce.  Why bother with getting rid of the good stuff?

The net result was something akin to A-1 Steak Sauce, but with a distinctly different flavor profile.  As my Number One Fan would say, “It’s the same, but different.” It worked beautifully, not to mention the fragrant aroma of my kitchen while the sauce simmered away.

The Recipe
Combine and blend all the ingredients together in a sauce pan, and set over medium heat until the sauce begins to simmer.  Turn the heat to low so the sauce gently simmers 30-45 minutes until it has reduced by about a third, stirring frequently.  Allow the sauce to cool before serving will also allow it to thicken further.