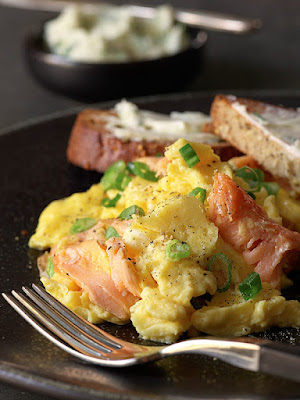 Wanting to show our appreciation to some great folks who helped us with a recent household relocation across a couple of state lines, My Number One Fan and I elected to do a festive Christmas themed brunch which was really more skewed toward breakfast fare. The menu included Apple-Cranberry Juice Mocktails, two hors d’oeuvres of Sausage-Cheese “Ornaments” and Roasted Cranberry-Goat Cheese Crostini, and a main course buffet that featured a Baby Spinach-Arugula Salad with Mandarin Oranges and a Dijon Vinaigrette, a Brunch Souffle Casserole served along side thick-cut bacon, a delicious orange-cranberry bread with honey cream cheese schmear, and for dessert, White Chocolate Pudding garnished with crushed pistachio nuts and maraschino cherries.

The recipes for these items follow, minus the Brunch Souffle which has already been posted in another Brunch lineup found here.  I also am not posting the delicious orange-cranberry bread because I didn’t make it.  It was a timely Christmas gift from an associate, which I was more than happy to share with my guests. 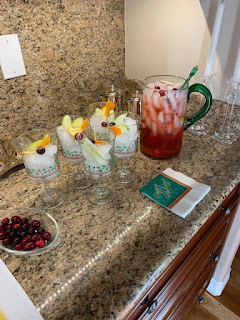 This is as much about presentation as it is about ingredients.  It helps if you have some festive stemware, but any large wine glass would do.  Don’t skip the garnish.  It really makes the drink.  This could easily be turned into a cocktail with the addition of Absolut Currant Flavored Vodka.  But this occasion was intended as a weekday brunch for people who didn’t have the luxury of going home to take a nap after the meal.

The quantities in the ingredients are just to ensure you have enough, but make as much or as little as you need.  Don’t be surprised, however, if your guests are wanting several refills of this refreshing beverage. There were five of us for a brunch lasting about two and a half hours and we went through two large pitchers!

The Recipe
The beverage will be better if you first refrigerate the club soda and both juices. The chilled liquids won’t melt the ice as much than if they were at room temperature, and therefore dilution of the mocktail won’t be as severe.

Fill a large pitcher with hard ice (not crushed).  In more or less even thirds, add the cranberry juice, apple juice and club soda and stir lightly to mix it all together.  Leave a little room at the top.

Throw in a few cranberries, and a few slices of apple. Then, using a sharp paring knife, slice off 1-2 inches of orange peel for as many glasses as you will be serving and set aside. Peel the rest of the orange and cut into slices.  Put 2-3 slices of orange in your pitcher. Give the pitcher another stir to incorporate the garnishes.

Fill each glass with ice.  Add 1-2 cranberries and a slice of apple.  Twist each slice of orange peel to release the oils and run the peel around the rim of each glass.  Pour some mocktail into the glass and add the orange peel garnish on top. Serve immediately as your guests arrive. 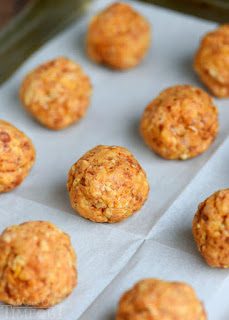 Known in the south simply as “sausage balls,” I took poetic license in keeping with the theme of the event and renamed them.  This is more or less the classic Bisquick recipe that has appeared on their boxes since the 1930s.  At some point, General Mills put Bisquick under its Betty Crocker umbrella and added a few additional seasonings that enhanced the recipe.  Serve this along side a dip made of 1/2 Dijon mustard and honey.  This recipe will make between 8 and 9 dozen, so scale the recipe back if you don’t want as many.  That said, the sausage balls can be frozen and then cooked without thawing.  Just add five minutes to the cooking time.

The Recipe
Pre-heat the oven to 350 degrees.

Mix all the dry ingredients first, then combine with the wet ingredients.  Using wet hands, thoroughly mix all the ingredients of the the dough together until it appears homogeneous.

Using hands or spoon, roll out the dough into 1-inch balls and place them on a cookie sheet or sheet pan sprayed with non-stick cooking spray.

Bake 20-25 minutes until browned.  Dust them with fine sea salt when they first come out of the oven.  Serve warm, or at room temperature along side the honey mustard.  Some folks like barbecue sauce or chili sauce, but that’s a matter of personal preference. 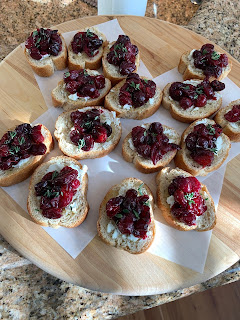 This seems to be a popular Internet food blogger recipe and a lot of them are doing it wrong.  This version is an exception with full credit given to the cakenknife.com website.  I did a couple of things differently: first, I used spreadable margarine instead of olive oil to toast my crostini because I was in a hurry.  I don’t think margarine detracted any and was infinitely easier to manage; secondly, I used half the cranberries but the same measure of seasonings.  I think this made for a more robust flavor and the right amount of crostini for five people.

My Number One Fan suggested that I use more goat cheese on each crostini next time and I agree.

Don’t overlook that this recipe uses both dried and fresh thyme.  The dried thyme will give the cranberries a delicious herbal background flavor, while the fresh thyme leaves on top of the finished product provide a bit of color as well as a final fresh herbal “nose”.  I would think fresh sage leaves, cut in a chiffonade style would also provide an interesting herbal aroma.  Either way, don’t skip using fresh herbs as a part of the recipe.

The Recipe
Pre-heat the oven to 425 degrees.

Use a serrated knife to slice the baguette; you should have somewhere around 20-24 slices.  Slather margarine (or olive oil if you prefer) on both sides.  Lay them out on a sheet pan or cookie sheet, lined with aluminum foil for faster clean-up.

Toast the baguette slices for five minutes; turn them over and toast for an additional five minutes.

In the meantime, mix the cranberries in a mixing bowl with the balsamic vinegar, maple syrup, dried thyme, salt and pepper.  Mix well so the cranberries are well coated.

Slather goat cheese on each crostini and put a spoonful of the cranberry jam on top.  Pinch off a few thyme leaves from their stems and sprinkle on top. 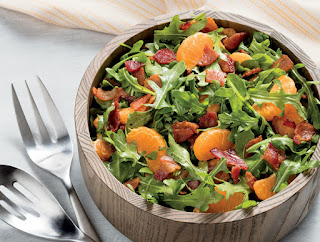 You can take a lot of license with the ingredients here.  Many Internet recipes will include chopped pecans, red onion, slivered almonds or feta cheese in this recipe.  Since one of my guests had a nut allergy, and My Number One Fan doesn’t handle red onion too well, I used sun-dried cranberries, fried won-tons and bacon crumbles.  You could also use all of one kind of greens or the other, or substitute red oak or green leaf lettuces.

For the Dijon-Chive Vinaigrette recipe, go to my Salad Dressing Repository, found here.

The Recipe
Make the dressing an hour ahead of time and let it rest at room temperature until you are ready to toss the salad.

Combine all of the ingredients for the salad except for the bacon and the won-tons in a large metal mixing bowl and refrigerate for at least thirty minuted before serving.

At the last minute, combine everything, and toss until all ingredients are evenly coated with the dressing. 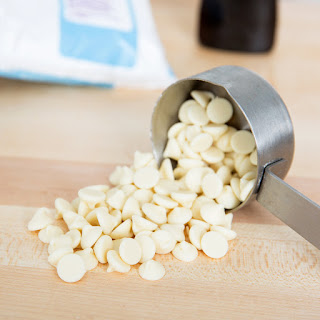 I will be honest, I was so frustrated with this recipe from the Taste of Home website, I was ready to toss it down the drain and pinch-hit for some other dessert.  It speaks to the problem with a lot of recipe sites in the blogosphere these days. They’re so busy monetizing their website that they forget why the consumer clicked on their recipe to begin with, which was to learn how to make the dish.  The Taste of Home website gave no information about technique which I will address below, and in fact, completely omitted the final step of the recipe, which is to refrigerate it after dishing out into individual portions.

Luckily, I stuck with it, hoping for the best, and figured out that if the pudding was going to solidify, it had to be refrigerated.  Since I’ve never made pudding in my life – not even the packaged kind that used to be hawked by a convicted sexual predator – I didn’t have the experience that told me this.  It just seemed logical.  If anything, I did not allow enough time for the pudding to be refrigerated, so it would have been nice for the Taste of Home website to have spelled it out for me.  But, I came in just under the wire and all was well.  The Taste of Home recipe also called for orange extract.  Based on a number of website comments, that was a mistake, so I used vanilla extract.  One of my guests said I “knocked it out of the park.”  That was endorsement enough for me!

The Recipe
The ingredients above will make about eight servings, so if you need less, reduce accordingly.

Mix the sugar, corn starch and salt together in a mixing bowl, then whisk in the cream and milk until well combined. Transfer the mixture to a heavy sauce pot.

This is where the Taste of Home website got it wrong.  They wrote that the mixture was to be brought to a boil over medium high heat.  Wrong.  Wrong, and wrong.  If you put this over medium high heat, you’re very likely going to do what I did, which is to scald the cream and create little brown lumps in your mixture.

It took me a considerable amount of time to correct this mistake.  Bring the mixture to a simmer over low heat, whisking constantly.  You do need to eventually bring the mixture to a boiling temperature in order for the corn starch to properly thicken the mixture, but this must be done gradually.  Look for little bubbles forming along the edges of the pot. Once the mixture is thick enough so that it will coat the back of a spoon, remove it from the heat for the next step.

Using a ladle,very gradually pour a bit of the hot cream mixture into the egg yolks while whisking constantly.  Stop when you put in a couple of tablespoons, whisk, and then repeat until the whole ladle has been mixed in to the yolks.  This is a technique known as tempering.  It allows the yolks to come up to a warmer temperature so that they won’t turn into scrambled eggs during the next step.

Return the cream mixture to the stove over low heat and slowly whisk in the yolks.  Stir constantly as the sauce thickens. Again, look for the little bubbles along the edges of the pot to know you’re at the proper temperature.  Keep whisking for another 3-5 minutes and remove the pot from the heat.

Ladle into serving ramekins and refrigerate for three hours.

Before serving, dust with the pistachios and top with a couple of maraschino cherries.  Omit the former for any guests, like mine, who suffer from nut allergies.