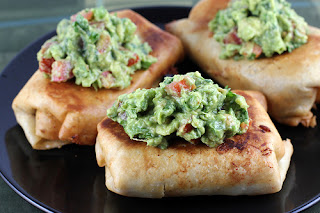 Hungry for Mexican food, but trying to watch the calories, I decided to make an oven-fried chimichanga recipe that my Number One Fan and had previously prepared one evening.  This recipe came from the Easy Recipe website and was a re-post of the original found on the the Creme de la Crumb website.  Since we had some grilled chicken on hand, this was a perfect way to handle the leftovers.  You can use any kind of chicken you want, including leftovers, or just grill or pan-fry a boneless chicken breast or two, or – as in this case – three or four boneless, skinless chicken thighs.  The point is: you want precooked chicken without skin, bones or much fat.  As usual, I tinkered with the recipe and made a few improvements. 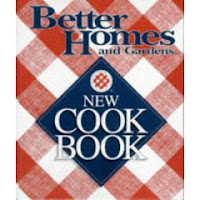 This meal was accompanied by my own guacamole recipe and a Spanish Rice recipe I found on the Internet that frankly wasn’t very good.  What I should have used, and what is presented here, is a forgotten Spanish Rice recipe from the Better Homes and Garden Cookbook.  That’s the spiral-bound cookbook with the hard, red gingham cover.  This cookbook made its debut in the 1930’s and has been continuously re-published to this day.  I have one my mother gave me before I left for college in the early 1970’s.  It’s a fourth edition printing with a copyright of 1968.  This cookbook has invaluable stuff, and is the cornerstone of any cook’s library. I made this Spanish Rice recipe many, many times throughout the seventies and eighties and simply forgot about it on this occasion.

So here are the three recipes; make one or all, and as they say south of the border, “¡Qlé!”

If you’re confused about what a chimichanga is, don’t feel alone.  I grew up in West Texas where the local cuisine fell into one of two categories: barbecue or Mexican food.  Burritos were standard fare at almost every fast food and snack bar everywhere, and they were all deep fried.

Sometime during the 1980’s when Mexican Food took on more national prominence, a burrito became defined as a flour tortilla, wrapped around ingredients that must contain re-friend beans.  A chimichanga was the same thing, only deep fried, and hence it is what I grew up believing was a burrito.  The advantage of not frying a burrito, of course, is that you can load it with produce ingredients like lettuce and tomato.

And re-fried beans?  Why are they called that?  Have they been fried and then re-fried?  No.  The English term “re-fried”, often interpreted as “fried again”, is a mistranslation of the Spanish word “refrito”. The prefix “re-” is commonly used in Mexican dialects to add emphasis to words.  Re-fried beans are simply cooked beans which have been mashed to a paste.  They can be fried in oil (or lard, would be more authentically Mexican) and served along side entrees as an accompaniment, or used as an ingredient in chimichangas and burritos right out of the can.

Don’t have a can of re-fried beans?  Do what I did on this occasion.  I took a can of pinto beans, drained them and then mashed them with a potato masher.  Basically had the same thing.

By the way, you can substitute ground beef for chicken in this recipe.

The Recipe
Pre-heat oven to 425 degrees.

Saute the onion in the olive oil until they begin to take on a little color.

Mix the onions with the chicken, sour cream, half the cheese, green chilies and the cilantro, and stir well to combine the ingredients.

The flour tortillas will be easier to work with if they are at room temperature.  Or, you can put them between two damp paper towels and zap in the microwave for 5 seconds.

Spread some of the re-fried beans across the diameter of the tortilla in a swath about a two inches wide, but not very thick.  Put about two tablespoons of the chicken filling along that line, and then, a handful of cheese on top of that.  Make sure the ingredients are evenly spread across the tortilla.

Now fold in the sides toward the center (position 1 and 2 in the diagram), then roll the tortilla up from the 6 o’clock side to the 12 o’clock side (position 3 to 4 in the diagram).  As you roll it up, also roll it over so the seam side is facing downward.  Your tortilla is now officially a burrito.  To make it a chimichanga (or “chimmy”, for short), it has to be deep fried, or in this case, oven-fried.

Place the chimmy on a baking sheet sprayed with cooking spray, and then spray down the chimmy with the cooking spray so it will properly brown and crisp up during cooking.  Not too wet; just a light spray evenly coating the surface of the chimmy will do the trick.

Bake in the pre-heated oven for about 45 minutes until the chimichangas are golden brown.

We buy ready-made guacamole and frankly, once you’ve made it fresh, you’ll never want anything out of a plastic tub or pouch ever again.  To make a great guacamole, you need fewer ingredients than you think, and the key is to have perfectly ripe Haas avocados.   The easiest way to determine if an avocado is ripe is to pull on the stem (which is more like a little navel on the bottom of the fruit).  If the stem doesn’t come out easily with a little flick of your thumb or finger, the fruit is not ripe.  If it comes out easily with very little effort and it’s green underneath, the avocado is ripe and ready to eat.  If the color underneath is brown, or if the stem is missing, the fruit is over-ripe and will probably have some discolored spots when you open it.

Ingredients
2 ripe Haas medium sized avocados
1/2 cup red onion, finely diced (yellow or sweet onion will do in a pinch, but I prefer red)
1/2 cup fresh cilantro (dried is fine if you must, but will require you to allow the guacamole to sit for a couple of hours or so while the cilantro reconstitutes)
juice from 1 fresh lime
3 tbsp jalapeno, finely diced, either fresh or pickled
2 medium tomatoes, diced
2 hard shakes of Tabasco Sauce
course grained sea salt


The Recipe
To open an avocado, sliced length-ways around the hard inner pit.  Twist the two halves in opposite directions to open the two sides.  The pit will remain in one side.  To extract it easily, drive the blade of a chef’s knife into the pit, but for god’s sake, don’t do this while holding the avocado.  If you miss, you will cut your damn hand. Lay the avocado down on your counter-top first.  Twist the knife and the pit will dislodge.

Scoop out the avocados into a mixing bowl.  Sprinkle with the course grained sea salt, and then mash to your desired level of consistency.  Some folks like their guacamole smooth and creamy; others, like it rustic with discernible chunks of avocado, which is my preference.  But there is no right or wrong way – it’s a matter of personal taste.

Put all the remaining ingredients into the mixing bowl with the avocados, except the tomatoes and then stir well to combine.  Add the tomatoes in last and gently fold them into the mixture so as to not masticate them.

If you’ve used enough lime juice, guacamole will keep a couple of days in the fridge without turning brown, provided you’ve put it in a container with a tight fitting lid.  In any event, make guacamole about and hour before serving it, which will allow the flavors to amalgamate – two hours if you’ve used dried cilantro.

This is the original verbiage, verbatim, from the Better Homes and Gardens’ cookbook for what was originally titled, “Spanish Tomato Rice.”  The one enhancement  I would make from this original recipe, would be to substitute Ro-Tel instead of canned tomatoes.  Ro-Tel is simply tomatoes with green chilies and will just add a little more authentic Mexican flavor to your dish.  The bacon is not considered traditional in Spanish Rice, but it’s a worthwhile deviation from the more mundane version. I would also omit the brown sugar, but here is the recipe in its original form, published in 1968:

“In a 10-inch skillet, cook 8 slices of bacon till crisp; remove.  Pour off half the fat.  In remaining fat, cook 1 cup finely-chopped onion and 1/4 cup chopped green [bell] pepper till tender but not brown.