Kicked Up Meatloaf with Mac and Cheese 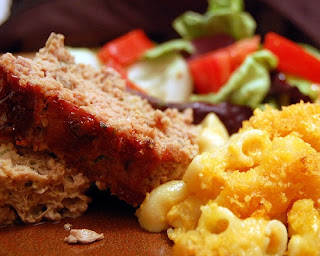 In the preceding post, I included a recipe for Boursin Macaroni & Cheese.  It was great, fit the bill for the evening I had planned, but was not to be repeated on this occasion.  This was not just about Mac & Cheese.  This was about the totality of a Comfort Food Dinner.  After a grueling week, indeed a grueling month helping my Number One Fan recover from some pretty nasty surgery, we wanted to mark the occasion of her fourth week in recovery with some Comfort Food.  Not just any style of Comfort Food would do, however.  This was a hallmark occasion requiring hallmark recipes.  So, I set about doing a full afternoon’s research to come up with the very best Meatloaf and Mac & Cheese recipes I could fathom.

The Boursin Mac & Cheese Recipe was good, but it wasn’t right for this meal and besides, I had no Boursin Cheese on hand.  And what I really wanted anyway, was something akin to a childhood favorite Mac & Cheese.  Hell, it was an adult favorite for many years, too:  The Kraft Blue Box of Macaroni and Cheese.  You know the one.  We all do.  It was, and perhaps still is, the best go-to meal for any parent that wants to experience the illusion of having created a freshly prepared meal for their kids with scant little time or effort.

I have over the past couple of decades watched my sugar intake, avoiding foods containing high fructose corn syrup and other sugars, and they are aplenty.  A couple of years ago, we had a Blue Box on hand and I decided to re-live the experience by making a batch.  I was hugely disappointed.  First, it wasn’t “The Cheesiest.”  And secondly, it was sweet as hell.  I could hardly finish my first and only serving, it was so sweet.  As they say, “You can never go back.”

But dammit, tonight, I wanted something that rekindled that experience without resorting to the original surgery source.  And I found my answer:  Velveeta.  Yes, Velveeta.

So, culinary snobs can click out of here now, or read on for the best Macaroni & Cheese Comfort Food recipe I could create, with thanks to the Southern Living recipe for the classic, Southern Sunday church potluck supper covered-dish recipe.  Theirs did not call for Velveeta, however.  It was a judgment call to substitute Velveeta to bring about my Blue Box childhood memory that is precisely the point of preparing Comfort Food.

Now, about the Meatloaf.  Google it and you will get quite literally tens of thousands of variations.  I was fascinated with the myriad of recipes in which the meatloaf is enrobed in bacon.  But I had a package of Pancetta on hand, and thought, Eureka!  Here was a way to elevate the ordinary to the sublime.

About the best meatloaf recipe I found was from Bon Appetit. I made several modifications to their recipe, however, as I normally do.

Unlike many if not most meatloaf recipes, mine does not contain eggs.
Truth be told, I had them ready but simply forgot to include them
before the dish was prepared to go into the oven.  It did not make a
difference perhaps because I used cream, which was not called for in
the Bon Appetit recipe that included two beaten eggs.  I think that
without one or the other, the meatloaf will crumble on you when sliced.

Taking a page from the Pioneer Woman website, I cooked my meatloaf on a broiler pan.  I don’t know why this had never occurred to me before.  Forget so-called meatloaf pans.  Cooking the meatloaf on the top rack of the broiler pan, allowing the grease to drip away during cooking made this an easy preparation and clean-up task.

The Recipes
For the Meatloaf:
Pre-heat oven to 350 degrees.

Combine half the ketchup with the cider vinegar, brown sugar and powdered mustard, mix well and set aside.

Saute the onion and garlic in the olive oil over medium heat until the onions are translucent, but not browned, about 5 minutes.

In a large mixing bowl, crumble the ground beef using your hands.  It helps if your hands are wet.

To the beef, add the sauteed onion and garlic, the remaining ketchup, dried parsley, chicken stock, heavy cream, black and cayenne pepper, Parmesan cheese and bread crumbs.  Use your hands to mix all of this together well.  Your meat mixture should be cohesive and moist, but not runny.

If you do not have bread crumbs, you can use eight slices of white bread with crusts removed.  Soak them in the chicken stock and cream, and then mix this into your meat and other ingredients.

On a broiler pan that has been liberally sprayed with the non-stick cooking spray, lay out the meat mixture and form into a loaf.  It should roundly ten to twelve inches long, four to five inches wide and two or so inches high.

Lay the slices of Pancetta over the top and sides of the loaf, tucking them under the loaf if necessary.

Slather the ketchup mixture containing the cider, brown sugar and ground mustard over the entire top and sides of the meatloaf.

Cook one hour and allow the loaf to rest ten minutes before slicing and serving.

In a sauce pan over medium high heat, melt the butter.  Stir in the flour and using a whisk mix well until you form a roux.

Slowly add the milk, whisking constantly, until all has been incorporated.  Allow the mixture to bubble for a few seconds.  You have now made a Bechamel Sauce.

Cut the brick of Velveeta into 1-2 inch cubes.  Add three to four cubes at a time to the Bechamel Sauce stirring constantly and allowing them to melt before adding more cubes.  Continue until all Velveeta has been melted into the sauce.  Add the powered mustard, black and Cayenne pepper and then remove from the heat.

Add the sauce to the macaroni in a mixing bowl and stir well to combine all the ingredients.

Turn the macaroni and cheese out into a baking dish that has been treated with non-cooking spray.  Level out the top of the casserole, and lay on an even layer of bread crumbs.  Sprinkle the paprika and parsley on top of the bread crumbs and bake for 30-40 minutes.  It should be bubbly and slightly browned on top.