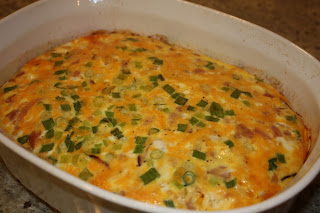 I make it a rule to never post anything in my recipe blog that I haven’t eaten.  And while I also generally hold that it is something I have also prepared, that doesn’t preclude me from posting a recipe actually made by my Number One Fan.  This is a delicious, light, dinner casserole, but it would also make a great Breakfast or Brunch dish, too.  If you Google Ham and Asparagus Casserole on the Internet, you’ll get dozens of recipes that include pasta, clearly a dinner entree.  But this recipe came from the “Everything Atkins” website, and contains no pasta.  Instead, it uses eggs and cream to create, in essence, a baked omelet. For the ham, my Number One Fan uses Hormel Premium Ham Steaks or Owens Fully Cooked Ham Steaks.

The Recipe
Preheat oven to 375 degrees

Melt butter in a saucepan over medium high heat.  Saute the green onions and asparagus until the onion is slightly wilted, but do not brown.

In a mixing bowl, whisk together the eggs, cream and seasonings until well blended.

Place the asparagus, green onion and ham in a buttered casserole dish, then pour the egg mixture over top.

Bake the dish 30-40 minutes until the eggs are set. Do this by jiggling the baking dish until the center of the egg mixture does not move.  Then, cover with the shredded cheeses.  Return to the oven and bake an additional 20 minutes or so until the cheese is bubbly and golden.