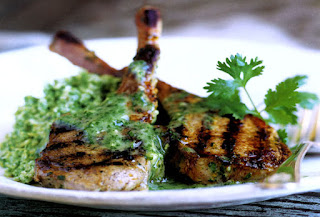 I got this idea from a website called Food 52 and they were called Szechuan Lambypops with Cilantro Chimichurri.  I was intrigued with the notion of a cilantro chimichurri as I have tried and wasn’t crazy about the more traditional Argentinean chimichurri made with parsley.  I significantly modified this recipe, however, in that I eliminated the “Szechuan” part of the dish.  Their recipe required toasted cumin seeds, coriander seeds and Szechuan peppercorns, which are not really peppercorns as we understand them at all.

Never having seen Szechuan peppercorns at my local grocer (not that I ever really looked for them), I ordered some from Amazon.  I was actually excited about trying them.  I dutifully toasted them, along with the other seeds, and ground them in a spice grinder.  I decided to taste it with a little dab on a wet finger. The taste was, in a word, ghastly.  In fact, the Szechuan peppercorn has a bit of an anesthetic quality and actually slightly numbs your taste buds, a characteristic I read about but dismissed as insignificant.  It wasn’t. Within minutes, my tongue was numb and I actually felt queasy, which made the odor of the spice rub I had created unbearable.  It, along with the remaining quantity of un-toasted Szechuan peppercorns found their way into my trash.

I’m glad, really.  I think the dish turned out absolutely fantastic without the spice rub.  The trick to a good lamb chop – as with any meat, indeed as with any food ingredient – is quality.  I bought two racks of lamb chops, properly “Frenched” with long, cleaned ribs, from a high-quality purveyor and paid top-dollar for them.  They were worth every penny.

The second alteration I made to the original recipe is that I found the chimichurri sauce to be a little too loose and acidic.  Perhaps I over-poured on the vinegar or used too much fresh lime juice, but a tablespoon of sour cream gave it just what it needed, and sour cream is not traditionally a part of any recipe I’ve seen.  No matter.  It worked and accompanied the perfectly grilled medium-rare lamb chops like ketchup goes with french fries.

The Recipe
Cut the two racks into two-rib chops.  A full rack is generally sold as eight ribs, so this will give you eight double chops.  Mix the soy sauce, olive oil, sherry, garlic and black pepper, then combine with the rib chops in a zip-lock bag.  Marinate 6 to 8 hours.

Make the Chimichurri several hours in advance and allow the flavors to amalgamate in the refrigerator. Blend all the ingredients except the olive oil and sour cream in a food processor.  Then, with the processor running, drizzle in the oil. Taste test and if you feel the sauce is a little too loose and needs some body, or perhaps a little more flavor, add the dollop of sour cream and pulse the mixture quickly once more.

Dry each lamb chop before putting them on a medium-high heated grill to avoid flare-ups.  That said, good lamb chops will have a layer of fat on one side and so you will need to attend to the fire carefully and move the meat when the fat starts to melt, which will create flare-ups without any added help from the marinade.

Because these are double chops, you will need to cook them on all four sides, roundly four minutes per side, but every grill is different.  You want your chops medium rare, if not rare.  Be concerned with over-cooking them rather than under-cooking them.  You can always pop them in your microwave if they are a little too red for your taste once you’ve taken them off the grill.

When you bring the chops off the grill, allow them to rest for ten minutes under aluminum foil. Then, before serving, cut each double chop in half.  Stack four of them on a plate, and drizzle the chimichurri sauce all around for a little drama, but definitely serve more sauce on the side.