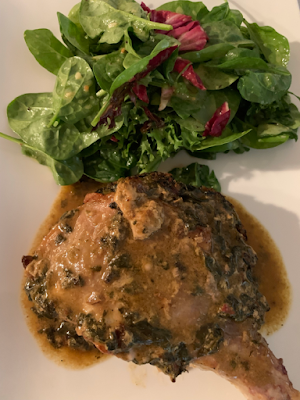 I may have one other recipe adapted from the so-called celebrity chef, Giada de Laurentiis, which says something about either how little I watched her show or how little I think of her cooking. In fact, I wasn’t inspired by her recipe so much as I stumbled upon it while searching online for any recipe that included the titular ingredients.  Of course, I modified her dish to adjust for items I had on hand, namely the use of roasted tomatoes instead of sun-dried, which can often be too chewy for my preference.  The product I used was Divina Roasted Red Tomatoes, and you can click here to learn about their range of Mediterranean style antipasti products.  They brought a delicious flavor to the dish I otherwise would not have gotten with sun-dried, but if you use the latter, be sure to get the ones that are marinated in olive oil.

I also happened to have on hand a double-cut pork chop, which was enough to serve two people.  Thus, I stuffed the chop twice opposite each bone, and then to serve, cut the pork chop in half.  This was a little tricky to do and required a bit of fancy knife-work.  It would be easier to make this recipe with individual pork rib chops, but make sure they’re at least 1-1/4 to 1-1/2 inches thick. And for reasons I explained in another pork chop recipe, found here, get Berkshire pork.  It will make all the difference.

The Recipe
Using a very sharp paring knife, slice into the chop on the opposite side of the bone and cut a pocket that goes all the way to the bone. Be careful and take your time. Liberally season all sides and inside the pockets of the chop with smoked salt.

Preheat the oven to 400 degrees and be sure the rack is in the uppermost position.

Cook the spinach in your microwave according to directions on the package, but cut the cooking time short by two minutes.  With the Green Giant brand I used, this amounted to four minutes of cooking time. Remove the spinach to a mixing bowl and use paper towels to dry off the greens as much as possible.

Heat the olive oil in a cast iron skillet until shimmering  and sauté the shallots until they begin to pick up some caramelization, about five minutes. Add the garlic, chopped tomatoes and the thyme and cook for a couple of minutes, then add the chopped spinach.  Stir all the ingredients well.  Add salt and pepper, and then allow two tablespoons of butter to melt into the mixture and sauté an additional 2-3 minutes.  Remove all the veggies to a large mixing bowl and add the goat cheese.

Stir all the ingredients together in the mixing bowl while everything is still hot from the stove, allowing the cheese to thoroughly melt into the mixture.

Stuff each pocket of the pork chop with as much of the spinach stuffing as they will allow.  You’ll no doubt have a smidgen of stuffing left over and that’s okay.

Stand the stuffed pork chop in the cast iron skillet so that it is upright on its bones with the stuffed pockets facing upward. Use whatever stuffing that might be left over to balance the standing chops. You may find, as I did, that a long wooden skewer through both side of the chop will further stabilize it in the skillet and help keep the pockets closed.

Use the remaining two tablespoons of butter to slather all over the sides of the chop.  This will help brown the meat in the high heat of the oven.

Roast 30-35 minutes.  Remove the chop from the oven and tent with aluminum foil while you make the gravy.

The skillet will still be hot from the oven, but put it over medium heat on the stove and pour in the chicken stock to de-glaze the pan.  Use a spoon or spatula to scrape up all the bits of stuffing left behind. Add the mustard and lemon juice and stir constantly until everything is well blended.  Season with more salt and pepper if needed.

Cut the double-cut pork chop in half and serve with the pan gravy spooned over.

This goes well with a simple salad of summer greens and a lemony vinaigrette.  Combine the juice of 1/2 lemon, 2 tablespoons of white wine vinegar, 1 tablespoon of lemon pepper (like Mrs. Dash), a teaspoon of Dijon mustard, then whisk in 4-5 tablespoons of avocado oil.  Toss the greens in the dressing and serve along side the stuffed pork chops.