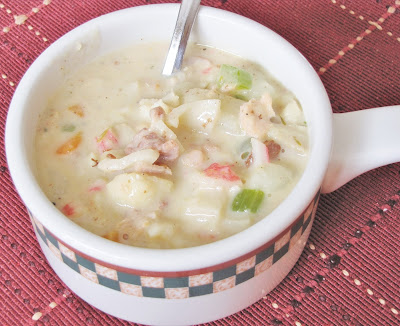 As with a low-carb version of a Bacon Chicken Chowder I posted earlier this year, the recipe presented herein meets the culinary definition of a chowder in that it consists of vegetables and protein in a creamy broth thickened with a roux (actually in this case, a slurry).  However, this is a far more traditional chowder made with seafood and contains the defining vegetable that merits the moniker of its New England origin, potato.  Also as with the earlier version, this is a Crock Pot assemblage.  It is infinitely easier to cook any cream-based recipe in a Crock Pot so one does not need to worry about it burning.

My Number One Fan gets all the credit for surfacing a number of recipes before finally deciding on an amalgamation of several, using one as a basic ingredient guide from a website called fourgenerationsoneroof.  But even so, the printout is littered with scratch-outs and hand-written notes, so much so, that the original recipe is mostly obscured.  And that’s a good thing, too, because the author of that abomination used both corn and potato in the recipe, and thickened the chowder with corn starch. Just, no.  Cream soups demand flour as a thickening agent; nothing else will do. In point of fact, My Number One Fan actually used instant potato flakes to thicken the chowder, but we both agree that a slurry of flour would be better and the recipe has been amended and written as such.

Finally, a word about the jumbo lump crab meat.  You can certainly go low-end and buy canned, but you’ll be better off by splurging and purchasing the lump crab you generally find in the refrigerated seafood case of your neighborhood grocer. It is typically sold in vacuum-sealed, see-through jars; be sure and look for the words “wild caught” and “pasteurized” on the label.

The Recipe
To pre-heat a Crock Pot, simply fill it with hot tap water, put the lid on it, and set the unit on high heat for about thirty minutes.

Put all liquid ingredients in a pre-heated Crock Pot treated with non-stick cooking spray and stir.  Holding back half the green onions and half the crumbled bacon, put
everything else except the flour in the Crock Pot and stir everything together well. Cover, and set the control on high heat for four hours.

Check for seasoning and add salt and pepper as needed. Using a small whisk, mix the flour together with about 6 ounces of very hot tap water and stir this slurry into the chowder.  Return the lid and bring the soup back to a simmer, then set the control on low for another two hours.

This goes well with cheddar biscuits or cornbread on a chilly fall or winter day.