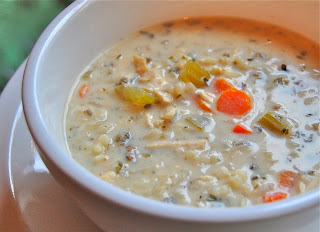 Did you know that most, though not all, of the wild rice sold in this country comes from the state of Minnesota?  Wild rice is in fact their state grain and a major cash crop.  Wild rice isn’t rice, but an aquatic cereal grain and has a delicious nutty flavor.  Minnesotans are famous for their creamy chicken and wild rice soup.  It’s sort of like chili in Texas.  Everyone has their version and the recipe has countless variations.

My Number One Fan surprised me after coming home one evening with a hearty wild rice and chicken soup that she made in a crock pot.  She actually referred to it as a “stoup,” – thicker than soup, but not quite a stew.  While generally, this would be a dish for a cold winter evening with the fireplace roaring (which might explain why the recipe for this dish originated from Minnesota), it has been unseasonably cool and rainy for several weeks and this soup really hit the spot on a chilly mid-spring day.

Her inspiration came from Creme De La Crumb website, but as always with recipes from our Kitchen Tapestry, she made some modifications that enhanced and improved the recipe.  The most notable change is that she did not use chicken breasts, which is the standard ingredient in almost all recipes you see for this dish online.  Instead, she used boneless, skinless chicken thighs, which fell apart on their own and did not require the last-minute, manual shredding the original recipe called for.

The second major variation was omitting chopped celery and using celery seed instead.  Brilliant.  I liked that approach because I think celery can sometime eclipse less subtle flavors rather than enhance them. She also used whipped cream cheese, which softened the calorie count a bit, but perhaps more importantly, blended into the soup much more easily and fluidly.

Serve as an entree with a salad and maybe a load of crusty French bread.  Or, as in our case on one occasion, serve along side Cheddar biscuits.

The Recipe
Put all ingredients except the cream cheese in a crock pot.  You might think you have too much liquid, but don’t worry.  In the final hour of cooking, the wild rice will absorb a good deal of it as the rice grains open and fluff up.

Cook on high for three hours, then set to low for two hours more.  Just before serving, blend in the whipped cream cheese.  Add more salt and pepper if needed.