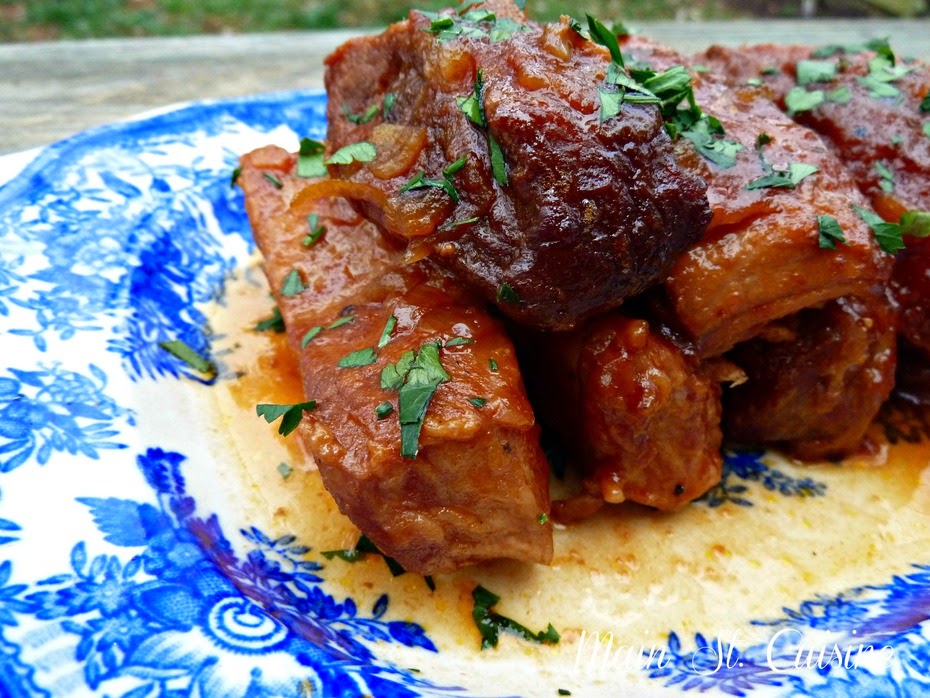 The country-style ribs that you see in the grocery store are in fact not ribs at all. Country-style ribs are cut from the blade end of the loin close to the pork shoulder. They are meatier than other rib cuts. They contain no rib bones, but instead may contain parts of the shoulder blade or have no bone in them at all.  I suppose that in order to be able to sell this tasty cut of meat, someone somewhere got the idea to slice them to look like ribs and call them ribs, and I further suppose that the FDA let them get away with what is really false advertising.  No matter, it is a great cut of pork that is delicious when prepared as you would a rack of ribs.

But I wasn’t in the mood for barbecue and searched the Internet high and low for something else.  I combined the contents of a couple of recipes to create an Asian-style flavor that is first prepared in a Crock Pot, and then finished with a glaze under a broiler in the oven.  Served with my Crunchy Asian Slaw and a handful of Sweet Potato Fries, and this ended up being a really good dinner.

For the glaze, I happened to have on hand some Williams Sonoma  Stir Fry Sauces, which I doctored with a little ketchup and hoisin sauce.  Since I doubt you have that sitting in your refrigerator, I recommend just using hoisin and ketchup, and perhaps whisk in a little olive oil.  The glaze is really to impart texture and appearance more than flavor.

Start
by filling a crock pot with hot water from your tap.  Put on
the lid and set the crock pot on high for thirty minutes while you
prepare the ribs.  This will hasten the cooking process so you won’t start with a completely cold vessel.

Mix
the garlic, ginger, orange marmalade, soy and hoisin sauces together
and blend well in a large mixing bowl. Then dump in the ribs, coating
each rib in the mixture and allow them to marinate for a half-hour to an hour.

When
the crock pot water is just starting to simmer, pour out the water and
layer in the onion rings.  Then shake off each rib and lay them in a
crisis-cross pattern on top of the onion rings.

Whisk
the white wine into the mixing bowl with the remaining marinade, and
pour into the crock pot.  It should be enough to cover the onion in the
bottom of the pot.

Put the lid on and cook on high heat for three hours, then low heat for two hours more.

The ribs are done when they are tender, but not falling apart.  Pull them out of the crock pot and lay out on an
oiled baking sheet or roasting pan.  Discard the onions and braising liquid.  Coat the ribs with your glaze, and then place them six inches under your oven
broiler for 2-3 minutes on each side until sizzling and browned.