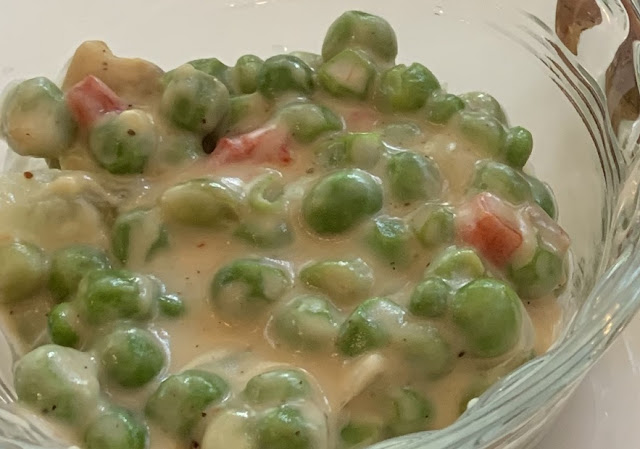 Last night, I did something of a “pub grub” menu with Cottage Beef Pies and Sticky Toffee Pudding, neither of which I prepared personally, but merely heated through what had been purchased from a mail-order gourmet frozen food supplier.  But the menu needed some rounding out and I researched what I seemed to have remembered from my one visit to London almost three decades ago: a traditional creamed English pea recipe.  It’s interesting how the memory can be altered as a casualty of time and age.  What I remember is akin to the recipe that I created; but what I observed was really something referred to in England as “Mushy Peas.”  The name actually sounds worse than the preparation, which really calls for Marrowfat peas rather than our English Peas or more commonly referred to in the US as Green Peas or Sweet Baby Peas.

They are both the same legume.  Marrowfat peas is merely the mature version that has been allowed to dry out in the field.  In the US, we tend to harvest them in an immature state, then promptly can or freeze them.  I used the later.

Pubs in Great Brittan have undergone a renaissance in recent years and while the traditional “pub grub” is still available, many public houses have taken their menus more upscale as tastes and diversity have become more refined and widespread.  Mushy Peas are no doubt still available, but they are little more than reconstituted Marrowfat peas prepared in a Béchamel sauce, or in many cases, just butter and cream.  And then they are mashed, of course.

Many creamed pea recipes on the Internet are inspired by the Mushy Pea/Béchamel version of the classic British dish, minus the mashing part.  I wanted the recipe that I had somehow conjured in my fading memory which included mushrooms.  I decided to add the pimentos at the last minute.  It made for a more visually festive presentation and added some pizzazz to the flavor profile which helped to offset a rather disappointing Cottage Pie.

Recipe
Allow the green peas to thaw at room temperature over a couple of hours or zap in the microwave enough to defrost them.

Bring the water with the onions to boil in a saucepan over medium high heat and allow to simmer for 7 minutes.  Add the green peas and simmer for another 5 minutes.  Drain thoroughly through a colander.

Melt the butter in the saucepan and then stir in the flour. Continue stirring over medium heat until the flour is well combined with the butter.  Add the beef stock, stirring constantly, then add the cream. Allow the sauce to bubble and thicken.

Add the mushrooms, pimentos, nutmeg, salt and pepper, and bring the mixture to a simmer.  Return the green peas and onions to the saucepan; stir well to incorporate all the ingredients and heat through.

As an added treat, although I did not do so on this occasion, you could top this with crumbled bacon before serving.  You could also put the whole thing in a casserole dish, top with shredded cheddar cheese, crumbled bacon and crumbled butter crackers (like, Ritz or Town  House), and bake at 350 degrees for 20-30 minutes until the cheese is browned and bubbly.  That would be a very sneaky way to get your kids to eat their green vegetables.