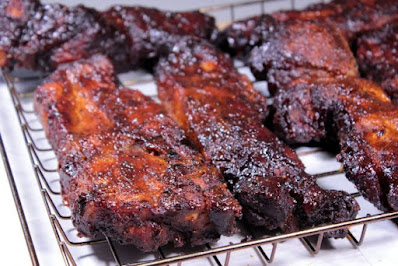 Some time ago, I posted a crock pot recipe for a cut of pork generally called Country Style Ribs, or sometimes referred to as Picnic Ribs.  They are not real ribs, as I explained in that post found here: Crock Pot Asian Style Country Ribs.

On this occasion, I wanted something more akin to a barbecued version but didn’t want to be tending to a grill for several hours.  So, after some internet research, I decided to go with an oven/grilling method and this was the end result.  They were very good although I have amended the recipe to include a modification I will make next time, which is to roast the ribs in the oven covered and at a slightly lower temperature.

One ingredient I used that probably isn’t in your pantry is smoked salt.  It’s not something I’ve seen in the grocery store in these parts, but any number of options are available through the Internet.  In this instance, I used a cherry wood smoked salt.

I bought eight good-sized ribs, somewhere around 4 pounds, and had about three tablespoons of spice rub left over.

The Recipe
Spray a roasting pan or Pyrex casserole dish with non-stick spray.  Liberally douse the ribs with apple cider vinegar, then coat all sides of each rib with the spice rub.

Cover with aluminum foil and roast the ribs for two hours at 300 degrees.

Raise the flame to about half to three-quarters strong, and slather the rib with any kind of barbecue sauce you like.  In this instance, I used a mixture of 1/2 Stubb’s Barbecue Sauce and 1/2 Newman’s Oil & Vinegar Dressing.  Grill the ribs on each side after slathering on the sauce to get the desired level of crust and char to your liking; for me, that amounted to about three minutes on each side.