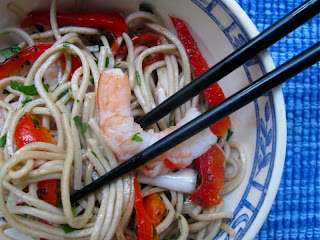 It’s hot.  It’s August. Time for something cold and refreshing for dinner.  This is what I made up in my kitchen this past weekend.  The thing I like about this approach is that you can use any kind of noodle or Asian noodle, and shrimp is the only other non-negotiable ingredient.  While I used what I had on hand, you can create any number of variations on the added vegetables, seasonings and sauces. By the way, in case you didn’t know, there is a difference between noodles and Asian noodles.  Asian noodles are so-called because they do not contain eggs.  Prior to this nomenclature compromise on the part of the FDA, only noodles containing egg could actually be called “noodles.”  Sometimes, the government does learn from its mistakes.  For more that you probably ever want to know about noodles, Asian and otherwise, click here to go to the Cook’s Thesaurus.


Mix the lime juice, garlic stir-fry sauce, soy sauce, sesame oil, and the chili garlic sauce together with a wire whip in a large mixing bowl.  Add the noodles, shrimp, red bell pepper and all but a couple of teaspoons of the cilantro and toss well to coat and combine.


Separate the dish into chilled pasta bowls and top with more fresh cilantro.