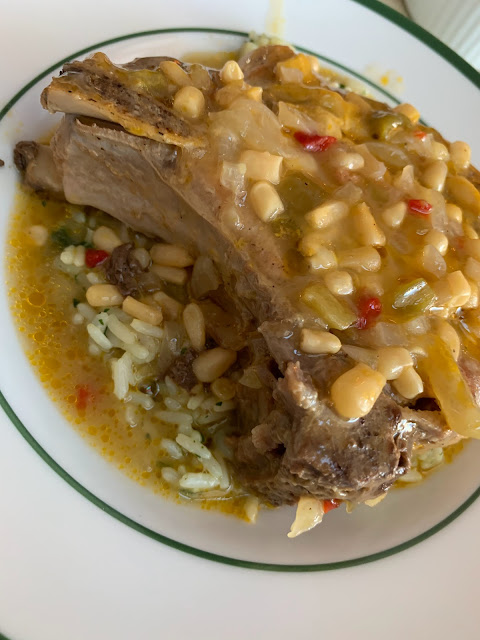 Here’s a simple way to make tough thick-cut pork chops fork-tender with a Mexican flavor profile.  I needed to find a recipe for a couple of disappointing pork chops that I knew needed a long braising time.  It just happened to be Cinco de Mayo, and I put together this recipe based on several I found on the Internet.  Incidentally, Cinco de Mayo is a Mexican holiday that seems more popular in the US than it does in Mexico.  In fact, the only two places that celebrate Mexico’s liberation from France is Mexico City and Puebla, where the decisive battle took place.  Border towns and destinations in Mexico that are popular with US tourists will celebrate Cinco de Mayo in much the same way we do, with food and margaritas.  In Mexico City and Puebla, you’ll see more traditional celebrations akin to our 4th of July, with parades, festivals and fireworks, and in Puebla specifically, you’ll see reenactments of the battle that occurred on May 5, 1862.

And yes, this is another can-o-dis recipe for which I will extend no apology.

The “secret ingredient” of this recipe is Salsa Verde, or green sauce.  It’s less well known than Salsa Rojo, or red sauce, which is standard fare at any Mexican restaurant along with a basket of crispy tortillas.  In fact, the latter is so popular, people have long since given up mentioning the color.  Salsa Verde derives its green color mostly from green chilies and tomatillos, whereas Salsa Rojo uses ripe red tomatoes.  You can find Salsa Verde in the Latin or Hispanic aisle of your grocery store.  A popular Mexican brand is Herdez, but more familiar American brands, like Ortega, Goya and Pace are generally readily available.  Get the level of heat you most prefer.  I used mild because of My Number One Fan’s delicate palate, and I keep a bottle of Tabasco handy at all times.

The Recipes
Preheat the crock pot by filling to the top with hot tap water and allow to sit covered on high heat for 30 minutes to an hour.

In a skillet over medium high heat, bring the olive oil to shimmering, then brown the chops for two minutes on each side.  Remove them to a platter.  Continue by sautéing the onions until they begin to caramelize, 12-15 minutes.

In the meantime, empty the crockpot of its warming water, and combine the soups, chicken stock, salsa verde, green chilies, corn pimentos and the spices.  Blend well.

When the onions are done, stir them into the crockpot.  Add the chops and cook on high for two hours and low for another three hours.

About thirty minutes before the chops are ready, combine the rice, chicken stock, dried onions and salt in a sauce pan.  Bring to a boil, then reduce the heat to low and simmer covered for approximately twenty minutes until all the liquid is absorbed.  Prior to serving, stir in the butter, allow it to melt, then add the  chopped cilantro.

Dish up the rice into a soup or pasta bowl, top with the pork chop and lots of sauce spooned over.  If desired top with grated cheddar jack cheese and a dollop of sour cream.