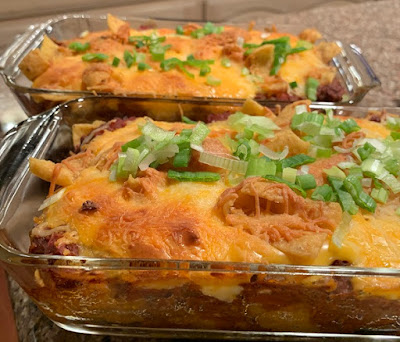 You would think that a recipe for Chili Fritos Pie would be pretty simple: chili and Fritos, of course – then, cheese would certainly be implied.  But like everything else in the blogosphere of food preparation and posted recipes, it gets as complicated as the often disputed origins of the recipe itself. New Mexicans will tell you that a gal named Theresa Hernandez created the recipe of simply spooning hot chili directly into a bag of Fritos at a Santa Fe Woolworth’s lunch counter in the 1960s. Texans, on the other hand, claimed it was the mother of the inventor of Fritos in San Antonio who included onions and cheese in her recipe, and served it in a bowl sometime in the 1930s.  According to her granddaughter, however, both stories are untrue.

In her 2011 book, Fritos Pie, Stories, Recipes and More by Kaleta Doolin, daughter of Fritos inventor, Charles Elmer Doolin, documented that in 1962 the recipe appeared on millions of bags of chips: “Heat can
of chili, pour into bag of Fritos, and sprinkle with grated cheese, and
chopped onions.”  In other words, the recipe was a promotional creation invented by the Consumer Services Department of the Frito-Lay Corporation.  It has been a staple of football stadium and drive-in movie snack bars ever since.

By the way, you’ll notice that Keleta calls the dish by its original name. “Chili Fritos Pie,” not “Frito Pie” as is commonly used. The product is called Fritos and there originally was no singular version of that word.  One chip would be rightly called a Fritos chip.  Two chips would be called Fritos chips or Fritos.  But the company confused consumers when it merged with Lay and became known as Frito-Lay.  There was no singular version of Fritos before then, but the marketing guys thought that “Fritos-Lay” sounded funny and Frito-Lay was easier on the tongue.

In any event, I’ll give the creator his due, and call the dish by its rightful name as written by his daughter.

The first time I remember eating the dish was in 1970 at Love’s Drive-In in the West Texas town where I grew up.  I was just learning to drive my first car, a 1966 metallic-copper Volkswagen Beetle.  I recall that the stout white onions Love’s used and the aromatic blend of seasonings in their chili recipe, heavily imbued with cumin, would linger in my car for days.

While the ingredients of the original dish are the predominate pallet upon which most modern recipes are based, there is a good deal of diversity, or in some cases, outright bastardization.  Consider the recipe “Healthy Frito Pie” which doesn’t even use Fritos.  It uses baked corn tortillas, canned vegetarian chili and reduced fat cheese.  Ugh.  Why bother?

Other recipes use all varieties of onions:  green, yellow, red, white; some chili recipes have beans, some not; any manner of cheese is used, including one that had goat cheese. One published recipe, not surprisingly by Pillsbury, had the bottom of its version of Fritos Pie lined with Crescent Rolls dough.

I group Internet Chili Fritos Pie recipes into three general categories:  the bag method, the SOS method and the lasagna method.  And I consider only those made with the original four simple ingredients to be a true Chili Fritos Pie, as the dish was originally intended: chili, Fritos, cheese and onions.

Top it with sour cream? Fine, but totally unnecessary.

Add jalapeños?  Okay, but also unnecessary if your chili has been correctly seasoned.

Beans?  No. No beans. Just, no. If you want beans, have them only as a side dish, which is what I have done here.

So, let’s break down the methods:

Now, about the ingredients:

I served this along side a poor man’s version of Guacamole, which I call Avocado Mash, and some refried beans; the preparation methods for these side dishes are provided below.

6 cups homemade chili or 3 15-oz cans of store-bought chili without beans, (like, Wolf)

4 oz Velveeta, melted in the microwave

Preheat the oven to 350 degrees.

Start with a layer of Fritos.  Scoop out a half-cup of chili over top of the Fritos for each casserole.  It’s easier to manage this if the chili is cold. Top with two slices of American cheese laid end to end in each casserole dish. Repeat the layers with the Velveeta.  Finish with a final layer using the shredded Mexican blend and cheddar.

Bake 30-40 minutes until the cheeses are melted and bubbly.  Garnish each casserole dish with the finely chopped green onion.

For the Avocado Mash:

Scoop out one ripe avocado into a mixing bowl.  Sprinkle with coarse sea salt and mash with a fork.  Squeeze in the juice of 1/2 fresh lime, one quick dash of malt or red wine vinegar and two dashes of Tabasco Sauce, then stir to combine.  Refrigerate until ready to serve.

For the Refried Beans:

Which are not fried twice as the name would imply.  The name comes from “refrito” which means in Spanish “well fried” or “intensely fried.” In fact, the refried beans that come out of a can (like, Old El Paso or Goya) are boiled, mashed Pinto beans with a bit of seasonings like garlic powder, onion powder and chili powder. They’re not fried at all. But unless you see the moniker “Fat Free” or “Vegan,” they may have lard in them which in this case, I highly recommend.

Empty a 16-oz can of refried beans into a microwavable dish, and mix in a 4-oz can of chopped green chilies (like, Old El Paso).  Cover and zap in one minute increments on high.  Remove the dish from the microwave after each zap, and stir the mixture well.  Repeat until the beans are steaming hot, about three times should do it.  Then, top with cheddar cheese and zap again for 20-30 seconds.