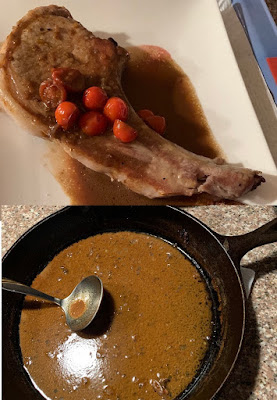 I am fond of quoting George Carlin:  “Most people are really f-ing stupid.  Should we just adopt all of their standards?”  The little ol’ pork chop – the one you see in Styrofoam containers wrapped in cellophane at your neighborhood grocery store – is a good study in just how stupid people can be.

In case you haven’t noticed, or maybe you have noticed and wondered why, most commercially available pork chops are not what they used to be.  Maybe you loved pork chops as a kid, because they were juicy, flavorful and you got to pick up the bone with your hands and gnaw the meat off of it at the dinner table.  Then, some time back, you started noticing how difficult it was anymore to find a good tasting pork chop or one that wouldn’t become all tough and dry when cooked.

You might have found various recipes to enhance the flavor of the pork chop, because on its own, today’s pork chop just isn’t very good.  I’ve come up with a couple of them on this recipe blog, like Mediterranean Pork Chops and Low Carb Copycat Shake ‘n Bake Pork Chops.  Even so, the pork chop – either the rib chop or the loin chop – lacked the gravitas of, say, Boston Butt or Spare Ribs.  There was just something missing that used to be there, but wasn’t anymore.

In response to consumers’ demand for leaner meat, pork producers in the late ’80s and ’90s started breeding the fat out of their hogs. The Red Wattle, the Duroc and the Mangalitsa, are all breeds of domestic hogs that have been gleaned for thinner bodies and lower fat ratios.  Hence the decades-long tagline for pork commercials: “Pork – The Other White Meat,” as producers attempted to compete with the boneless, skinless chicken breast.  The problem is, and where the stupidity lays, is that breeding the fat out of pork is to eliminate the very thing that makes pork chops taste good. In the truest sense of the metaphor, this really was cutting off your nose to spite your face.

The premise that fat is bad is inherently wrong.  Fat is not bad.  Fat does not make you fat. In fact, your body cannot process protein without fat.  It wasn’t until trendy restaurants, who heretofore never put pork chops on their menus, started indoctrinating a whole generation that grew up on tough, flavorless pork chops about the deliciousness of a breed of hog, the Berkshire, that had not been genetically modified.  Yes, it took another stupid idea to bring us back to the pork chop of yore.

Non-GMO is now a PC label that indicates – supposedly – something wholesome about your food so you can somehow feel better about yourself.  It is another completely stupid concept.  What most people do not realize is that there is very little you eat today that has not been genetically modified. Corn, for example, would be inedible without the genetic modifications made by native peoples of North America.  And even today, strains of corn have been modified to withstand disease, drought and increase yield.  Without genetic modification to make food better and more plentiful, you’d have more people starving than you already do.

Restaurants began selling Berkshire Pork in the early 2010s and lo and behold, pork chops are in favor with flavor again.  Berkshires are raised as hogs are meant to be raised and their rib chops taste like pork chops should taste.  The breed is originally from Japan where they are called Kurobuta, or “Black Pig.”  Culinarians simply call this the world’s best pork.

The Recipe
You will need a cast iron skillet, or some other oven-proof skillet to prepare this dish.

Pre-heat the oven to 375 degrees

Heat the olive oil and the 2 tablespoons of butter in the skillet until shimmering.

Sprinkle 1 pinch of smoked salt on each side of the pork chops just before placing them into the hot oil. Do not do this too far in advance, or you will begin to leach water from the meat which you do not want to do.

Remove the skillet from the oven, and the chops from the skillet.  Tent the chops with aluminum foil while you make the pan gravy.

Return the skillet to the stove on medium high heat. Add and melt the butter, then add the shallots and saute until they wilt and become aromatic, about four minutes.. Add the cherry tomatoes and saute for another couple of minutes. De-glaze the pan with the white wine, scraping up all the crusty bits from the pan with a spatula.  Add the chicken stock, heavy cream and the dash of kitchen bouquet.  Stir constantly while the gravy bubbles away, about two minutes. Add freshly ground black pepper and test for seasoning.  Add a pinch of smoked salt if needed, although I usually don’t.

Place the chops on serving plates and spoon over the gravy, being sure to snare some of the tomato halves for each chop.

By the way, these go exceptionally well with my Smashed Potato recipe, found here.