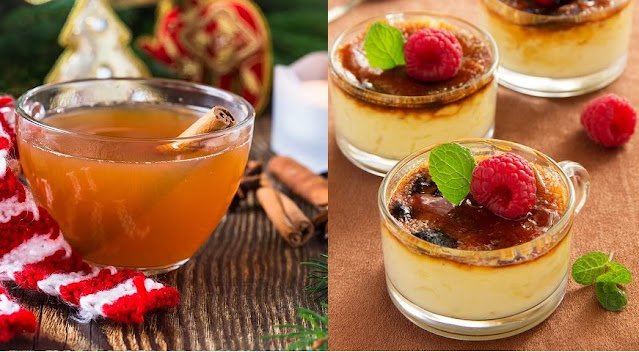 At a recent Christmas dinner with the family, these dishes made greater impact than the entree.  Included in this blog posting are what I served to begin and end the meal, namely Christmas Wassail with Dark Rum and Eggnog Crème Brûlée, along with a bonus recipe also served at this event: Bacon Wrapped Maple Glazed Carrots. The beauty of all three recipes is that they can be prepared ahead of time, refrigerated overnight, and brought to the proper temperature while dinner is being prepared.

Originally made from ingredients that would have included mulled wine, curdled cream, roasted apples, eggs, cloves, ginger, nutmeg and sugar, the name comes from the Anglo-Saxon words, waes hael which means “good health.”  The beverage is centuries old.  Generally consumed around the time apple harvests would have been peak, in late fall, the drink took on popularity during the winter solstice which slowly evolved to become a traditional Christmas beverage.

Gradually, the primary ingredient became apple cider, which almost everywhere except in the U.S. contains alcohol.  Here we would call that “hard cider.”  Modern versions of the recipe vary, but generally include non-alcoholic apple cider, or apple juice, orange juice and some, like mine, also contain pineapple juice.  Absent true hard apple cider, my version contains dark rum for that extra measure of Christmas Spirit.  I think this version tastes like Father Christmas, with thanks to therecipecritic.com website for their inspiration.

The beverage can be made in any quantity you choose, so long as the ratios of liquid are maintained.  The spices can be measured in any quantity depending on how strong you care for them.  I don’t think you can overdo it, though, so err on the side of too much rather than not enough.

The Recipe
Combine all ingredients except the rum in a large stock pot or dutch oven over medium high heat until simmering. Lower the heat to its lowest setting and allow the Wassail to gently simmer for at least an hour before serving, but 2-3 hours is better. Turn the heat off about 30 minutes before serving. The reason for this to allow the Wassail to cool slightly because alcohol burns off at a temperature of 173 degrees Fareignheit, which becomes an adversary to consumption.

Before serving in a coffee or tea cup or mug, add an ounce of rum, and then ladle in the Wassail, avoiding any of the fruit or spices, although leaving one star anise and/or a stick of cinnamon in the cup makes for a cool Christmas garnish.

I posted the classic Crème Brûlée recipe some time back, found here.  That’s still a great recipe, but this one is arguably simpler because a lot of the work has been done for you in the eggnog itself.  The original recipe made eight 5-oz portions; this recipe makes about four, maybe five, so if you need more, alter the proportions accordingly.  I did very little to alter this recipe from Allrecipes.com.

The origins of eggnog and even its name is somewhat obscured by history, but it is another centuries-old beverage that found its way to the New World during the colonial period.  Whereas the European version of the drink contained wine or more likely sherry, which was the ingredient used by the European aristocracy of the era, American eggnog contained distilled spirits which were far more common than wine, and rum was a favored choice becasue it was cheaper than brandy or whisky.

The first written account of the eggnog recipe occurred around the time of the Revolutionary War. The basic ingredients haven’t changed over the years, predominantly eggs, cream and sugar with spices such as nutmeg and cinnamon.  Almost all countries have some version of eggnog under a variety of names, such as Rompope in Mexico and Kogel Mogel in Poland.

Today, of course, eggnog is sold without the booze and only seasonably available between the Thanksgiving and Christmas holiday periods.

The Recipe
Preheat the oven to 350 degrees. Place 4-5 ramekins in a shallow baking dish.

Place the egg yolks and sugar in a mixing bowl and using a wire whisk, beat the mixture until homogeneous and slightly frothy, at least a couple of minutes.

Place the eggnog in a sauce pan on the stove over medium heat.  Stir regularly until the eggnog simmers, about ten minutes.  Remove from the heat.

Pour about a 1/4 cup of the hot eggnog into the egg and sugar mixture slowly while whisking all the while to keep the eggs from curdeling.  Do this a second and third time, and then pour all the remaining eggnog into the combined mixture.  Add the nutmeg, cinnamon and vanilla extract and blend well.

Bing some water to a boil in a tea kettle and pour it into the shallow baking dish holding the ramekins until the water level reaches halfway up the side each ramekin.

Carefully pour the eggnog mixture into each ramekin until 1/8′ from the top.

Bake the ramekins in their hot water bath, known in French culinary terms as a Bain-marie, until the custard sets, 30 to 45 minutes.  The centers should wiggle slightly when shaken, but not be soupy.

Remove from the oven and allow to cool to room temperature, 1 to 1-1/2 hours.  Cover with cling wrap and refrigerate at least three hours up to overnight.

When ready to serve, sprinkle a liberal portion of the green colored decorating sugar on the surface of each Crème Brûlée.  Put the ramekins under a broiler for about thirty seconds until the sugar becomes brown and bubbly.  Or use a kitchen blowtorch if you have it, being careful to keep the flame constantly moving over the surface of the sugar.  Garnish each ramekin with a couple of fresh raspberries and a sprig of mint leaves. 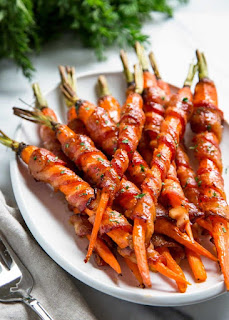 This recipe will be far more visually arresting if you buy garden fresh carrots that have not been processed and still have their greenery intact, the way Bugs Bunny would prefer.  These will, however, require you to thoroughly scrub them to remove any sand or soil.  Cut off the greenery and keep about an inch or two of the stem intact.

I’m not especially a fan of carrots as a sidedish, which it why there are not any yet posted on this website.  However, this is one way to get your kids (and grownups who don’t like carrots) their dose of beta-carotene and furthers the notion that anything with bacon is a good thing.  There are a ton of recipes on the Internnet for this very simple dish, but I used ClosetCooking.com for inspirataion.

After prepping the carrots, wrap two slices of bacon sequentially around each carrot.

Lay out the wrapped carrots on a wire rack atop a baking sheet sheet or sheetpan and brush with the maple syrup.