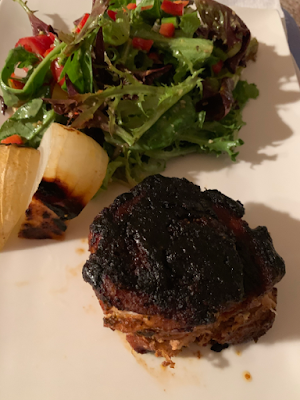 I have been studying up on the dining prospect of preparing pork belly for dinner one night. As is typical in the Internet culinary world, opinions are diverse in how to prepare this lowly cut of pork that until recently, hasn’t been getting a lot of attention short of preparing it as bacon.  In general, a 1-2 pound pork belly is prepared flat, with the fat side up.  The meat is cooked low and slow, and then finished in more intense heat to crisp up the skin.  Some recipes call for one to poke small holes in the skin and coat it with baking powder, then allowing it to rest uncovered in the fridge for several hours.  The crispy skin is highly sought after.

But my butcher did something different.  He took a generous slice of the pork belly and wound it up like a cinnamon roll, tying it off with butcher’s string.  So, another preparation was called for and this is what I created.  I served the pork belly “pinwheel” along side a simple baked sweet onion and a salad of winter greens with a Dijon Chive vinaigrette made with avocado oil; the dressing recipe may be found here.  It’s a repeat!

Liberally season each pork belly with the spice rub.  Rub it all around and get it into all the nooks and crannies.

Braise the pork bellies, covered, for one hour, then turn down the heat to 250 degrees and cook another three hours.

Remove the pork bellies from the braising liquid and allow to rest for 15-20 minutes.  Fire up the broiler on your oven.

Coat each side of the pork belly pinwheel in sparing amounts of the Woody’s Cook-in’ Sauce.

Broil each side of the pork for 1-2 minutes until you pick up a little char. Spoon over a couple of tablespoons of the reserved braising liquid and be sure to remove the butcher’s string before serving.