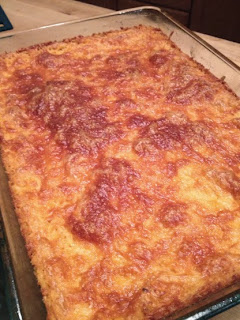 Tired of the usual accompaniments for dinner on this particular evening, I felt like something out-of-the-ordinary.  Taking something as common and ordinary as grits, and elevating it to an absolutely sublime side dish really fit the bill.  And I’ll tell you: as a left over, microwaved with a pat of butter, they are almost better the second time around.  Don’t be tempted to skip the sherry mushroom topping, but you can forgo shittake mushrooms and use the usual canned button variety if you must.  In any event, the mushroom topping makes the dish although the cheese grits would probably stand up on their own in a pinch.

While this recipe called for cheddar and provolone, you can experiment with other cheese combinations although I think cheddar is non-negotiable.  Swiss, Mozzarella or Parmesan cheese could easily be substituted for the Provolone.

This will make a perfect accompaniment to a roast of any sort, and would be good as a substitute for potatoes for almost any meal. This recipe was adapted from a recipe on the menu at Jacques-Imo’s Cafe in New Orleans.  I must confess as many times as I’ve been to that great city, I have never eaten at that restaurant, but promise to do so the next time I hit the Big Easy.

The Recipes
First, prepare the grits:
Preheat oven to 350 degrees and  use non-stick cooking spray in a baking dish.  I used a 7-inch by 11-inch dish, but an 8-inch by 8-inch would work fine.  In either event you want a dish with about a 2-inch depth.

Using chicken stock instead of water, prepare grits according to the directions on the package.  You may or may not need all of the 3/4 tsp salt depending on how salty your stock is, so taste it before you add the grits.  Don’t mistake instant grits for quick-cooking grits.  Quick cooking grits have been parboiled and require five minutes to finish.  There is no appreciable difference between quick-cooking grits and regular grits except the latter takes fifteen minutes longer to cook.

Once the grits have finished cooking, transfer to a mixing bowl and stir in the butter and cheeses, allowing both to melt into the grits.  Add the cream and milk and stir well into the mixture. With your beaten eggs in a small bowl, add a tablespoon or so of the grits to the eggs and stir well.  This will temper the eggs so they won’t start cooking on you when you add them to the hot grits.  After a quick stir for a few seconds, mix well into the mixture and then fold it all out into the baking dish.  Level it off and then place the baking dish in the hot oven for 50 minutes to an hour until the top is golden browned and firm to the touch.

In a skillet over medium high heat, melt the butter and add the olive oil until heated, then saute the green onions until limp, but not browned, about three minutes.  Add the mushrooms and garlic and saute until the mushrooms are limp, about eight minutes.

Add the sherry, cream and dried mustard, and simmer the mixture while stirring constantly until the liquid reduces by half, about five minutes.  Add the parsley, black pepper and test for salt.  Keep warm until ready to serve.

Now, assemble the dish:
When the grits are done, allow them to cool about ten minutes before cutting into square serving portions, then top with a tablespoon or two of the warm mushroom topping.