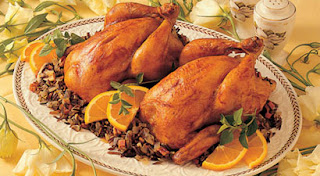 A Rock Cornish Game Hen is not from Cornwall, and neither did it originate there.  It is not a game bird, but domestically raised.  And it may or may not in fact be a hen; fifty/fifty it’s a male bird.  So what the hell is it?  It’s a small chicken.  Period.  The USDA defines it as a young, immature chicken weighing not more than two pounds ready-to-cook weight.  But Americans love marketing hype and as this food source came into production in the 1950s, the result of a Connecticut couple cross breeding a Malayan Fighting Cock with a White Plymouth Rock Hen, the Rock Cornish Game Hen name was born and Sunday chicken dinners were never the same.

Coupled with wild rice, this is an easy, but elegant dish to prepare.  Popular on restaurant menus of the 1960’s and 70’s, the only way you’ll enjoy this bird these days is to make it at home.  You’ll find them only frozen, generally sold two to a package.  Put them in your fridge for a couple of days to thaw.

Many recipes call for stuffing the bird, but I personally think that is a lot of work for little return, especially given the size of the bird’s cavity.  So, I present this as two dishes that can easily be prepared and cooked along side one another.  But you will likely only have the wild rice casserole as a leftover.  The Rock Cornish Game Hen is just the right size for a single meal.

I have modified recipes that I found online for this post, although I regularly made an Apricot glazed Cornish Hen frequently in the early 1990s.  My Number One Fan reminded me last Sunday that we hadn’t eaten this dish in quite awhile, so I had to reacquaint myself with the techniques and refine my thoughts for the wild rice casserole.  With thanks for the inspiration to The Loaves and Fishes Party Cookbook for the hen, and Chef Linton Hopkins of Restaurant Eugene in Atlanta for the wild rice casserole, here are my interpretations of these timeless classics.

These recipes assume you have a double-deck oven because they cook at different temperatures, with the hens at 425 degrees versus 350 for the casserole..  If you only have one oven, you can cook the casserole at the higher temperature for 1/3 less time, but not the other way around.

The Recipes
First, cook the rice:
Melt 1/2 of the butter (3 tbsp) in a saucepan over medium heat, then add the rice.  Stir frequently to coat all the grains and allow to sizzle away for a couple of minutes.  Then, add the chicken stock and bring to a boil.  Put a lid on the sauce pan, and lower the temperature so the liquid is gently simmering.  Cook for one hour until the grains of rice are soft and opened. Drain well and set aside.

Then, make the casserole:
Using the remaining butter, saute the onions until they are clear, but not browning.  Then, saute the mushrooms until they are limp and well done, all told around ten minutes.  Add the red bell pepper toward the end so they get five minutes or so.  Remove all from the heat and set aside.

In a large mixing bowl, add the mushroom soup, cream and all the seasonings, and blend well.  Fold in the vegetable mixture and the rice.  The mixture should be loose, but not soupy.  Place the mixture in a buttered casserole dish and bake uncovered for about an hour, until bubbly and the top has browned a little.

Meanwhile, prepare the hens:
Pre-heat the oven to 425 degrees.

Coat the inside of a shallow roasting dish with the non-stick cooking spray.  Smear the butter all over the birds, then liberally dose them with the spice rub.  Rub the butter and the spices into and all over the skin of the bird.  It’s messy, but fun! Put the sections of oranges into the cavity of the birds.  Pop them into the oven, and roast for thirty minutes.

While the birds are cooking, make the glaze, then finish the dish:
Melt the butter in a saucepan over medium high heat.  Add the minced shallots and saute for five minutes until they are limp, but not browning. Add the preserves and honey, and allow it to liquify.  Add the mustard and seasonings and stir to combine.  Removing the saucepan from the heat (very important!), add the brandy, and stir into the apricot mixture.  Return the pan to the heat, and allow it to simmer for a few minutes so the alcohol evaporates.  If you have a flare for the dramatic, you can light the brandy with a fire stick and flambe the sauce, but do so at your own risk.  If you’re cooking on a gas range as opposed to electric, the sauce will likely flambe on its own, so be damn careful.

When the birds have cooked thirty minutes, ladle the apricot glaze over them liberally.  Return them to the oven, and roast for another thirty minutes until the hens are done.  A digital thermometer is the base way to determine this, or you can just poke the bird with a knife at the area where the thigh meets the body of the bird.  If the juices run clear, the bird is done.  Allow the hens to sit fifteen minutes or so before serving.  You can cut them in half down the spine to serve if you want, but I personally like serving the whole bird on a large plate.