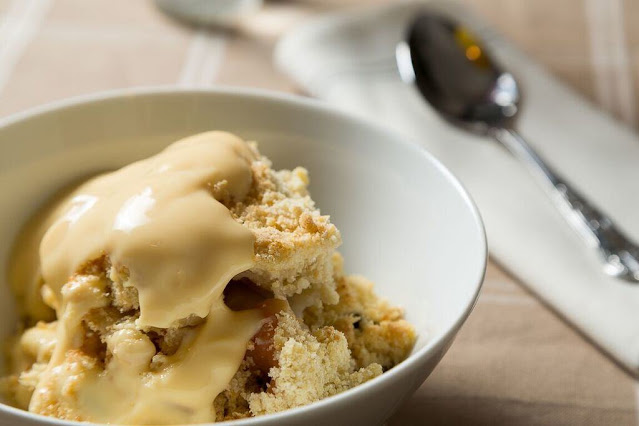 This isn’t a particularly difficult dessert to make in terms of culinary prowess, but it is rather labor intensive.  The results are worth the investment, however, if you’re interested in serving a very traditional dish from the British Isles, which I’m pretty sure was the forerunner to the All-American Apple Pie.

I’m not sure of the true origins of Apple Crumble because it appears the British and the Irish both take credit for it.  Regardless, it made an excellent finish to a themed British dinner I served last evening that included Roast Prime Ribs of Beef with Yorkshire pudding, my recipes for which can be found here and here.  The meal that included this dessert was a precursor event to a home-theater family viewing of Alfred Hitchcock’s Dial M for Murder (1954), quintessentially British.

Regardless of which country takes legitimate credit, Apple Crumble is a very warming dish perhaps better meant for a chilly autumn day.  That said, there is no reason why this dish cannot be prepared ahead of time and served at room temperature, which is what I did. The Apple Crumble held itself well after cooling on the kitchen countertop, then covered until served.  I made the custard while the roast beef was finishing in the oven, served still warm after being kept in a double-boiler on the stove over very low heat.

The traditional recipe of Apple Crumble is made in the U.K. with Bramley apples, which seem plentiful on that side of the Atlantic but is not a variety that is common in the U.S.  Since the Bramley is a somewhat tart apple, it is usually cooked, which sounds a bit like the U..S Granny Smith apple and in fact, the recipe that provided most of my inspiration from allrecipes.com calls for exactly that.  I think any firm apple will do, including sweeter varieties like Fuji and Honey Crisp, which is the combination I used.  I would steer clear of mealy varieties of apples like Red or Golden Delicious.  Really, any apple that you would use in a traditional apple pie will work.

Finally, the traditional UK version uses a type of sugar called Caster Sugar, which is somewhere in between confectioner’s or powdered sugar and typical table or granulated sugar.  Since I could not find Caster sugar, I used a 50/50 blend of granulated sugar and light brown sugar and no one complained.

The Recipe
Pre-heat the oven to 375 degrees.

Treat an 8″ x 10″ casserole dish with the non-stick cooking spray, then add the apples and lemon juice, and toss to coat.

In a separate mixing bowl, combine both sugars, flour, cinnamon, nutmeg and salt and use a wire whisk to thoroughly combine.

Place all the small cubes of butter into the flour mixture and using your hands, rub the butter into the dry ingredients until a course mixture is formed.  Don’t worry about making it even; the crumble will benefit from the irregular textures.

Put all the of the flour/butter mixture over the tops of the apples and spread it out to cover.

Bake for 45-55 minutes until the flour mixture is starting to turn a golden brown and the apples are bubbling through the crust.

If you’re going to keep the Apple Crumble around at room temperature before serving it later, allow it to cook completely before covering.

Now for the Proper Custard!  This is from a site called Parker’s British Institution, but the ingredients have been adjusted for US measurements.

The Recipe
Not every, or even many recipes for a British custard sauce say anything about using a double-boiler, but I hardily recommend it. Putting milk over direct heat makes it extremely difficult to avoid scorching it unless you’re very, very attentive. And scorched milk will leave you with little brown lumps that detract from the texture of the sauce and in the extreme, will ruin it entirely. Double-boilers are goof-proof.

Don’t have a double-boiler?  Neither do I.  I use a stainless mixing bowl on top of a sauce pan of simmering water.

Add the cream and milk to the mixing bowl and place the mixing bowl over a saucepan of water on medium high heat and simmering at a good clip.  Stir with a wire whisk periodically.  When the milk and cream start to give off a little steam, you’re ready for the next step.

Whisk the yolks, sugar and corn starch together in another mixing bowl until well blended and creamy.

Pour a little bit of the hot milk into the egg mixture while whisking all the while.  Go slowly at first to be sure you don’t scramble the eggs.  Continue to add the hot milk to the eggs until you’ve put in about a cup of milk.

Then, return the eggs and milk mixture back into the bowl on top of of your simmering water. Add the vanilla.

Continue to stir frequently with a wire whisk as the mixture thickens.  When it coats the back of spoon and you can run your finger across the coating without the liquid running back together, the mixture has become a custard sauce and it is ready to use.  You can keep it over hot water (not simmering) until ready to serve but stir periodically to keep a skin from forming over the top of the sauce.