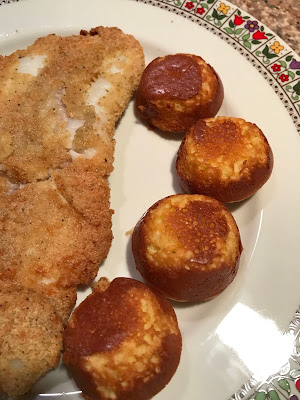 Still staying true to an Atkins Induction diet, also not far off the mark of a strictly Keto diet, my Number One Fan misses Southern cuisine like fried catfish and hushpuppies, not to mention mashed potatoes, grits, and pasta.  But the former last night underwent a Keto/low carb makeover that actually came out pretty good.

For the oven-baked hushpuppy muffins, I worked with an awkwardly composed recipe from This Mom’s Menu website.  Her original recipe called for coconut flour; I used almond flour since that is what I had on hand.  What she didn’t bother to write into her recipe, choosing to leave it obscurely buried in her bloviated blog text, was that you needed to escalate the amount of almond flour if you substituted it for coconut flour. What she didn’t bother to say was how much, so I took a shot at an additional two heaping tablespoons. These came out fine – not really a hushpuppy with the delicious fried cornbread texture or flavor, but a delicious little muffin that was really tasty.

By the way, how did hushpuppies get their name?  This guy named Robert Moss, a correspondent for Southern Food and author of several food travel books wrote what amounts to an academic paper on the subject: “The Real History of Hushpuppies.”  I won’t expand further.

The Recipes
You will need an electric mixer and a 24-count mini-muffin tin for this recipe, not to mention an Airfryer with the second shelf insert.

First, make the catfish coating:
If your catfish fillets are frozen, thaw them in cold water in your sink for about thirty minutes.

Make the “breading” by pulsing 1-1/2 ounces of pork rinds in a food processor until completely pulverized.

Add the almond flour and the Nature’s Seasons Seasoning to the food processor and pulse a couple more times. Place the breading mixture in a flat container or mixing bowl so you can dredge your catfish fillets in a few minutes.

Blend two eggs in a bowl well with a whisk and set aside.

Next, make the hushpuppies:
Preheat your oven to 375 degrees.

Combine the butter and cream cheese in a mixing bowl and blend well with the electric mixer.  If you have a mixing bowl with a handle and pouring spout, it will make your life easier.

Add the eggs and mix again.  Add the almond flour, baking powder, all the seasonings and the dried minced onions, and mix well.  You want you batter even, smooth, without any lumps.

Pour the batter into the mini-muffin tins to about 80% full.  You may have a little batter left over (I did).

Put the mini-muffin tin in the oven on the top rack.  Bake for thirty minutes.  Allow them to cool about five minutes after removing from the oven.  They should mostly turn out easily, but use a spoon to pry out the stubborn ones.  Serve hot, slathered with butter.

These will also keep well for a few days in the refrigerator, kept tightly sealed in a zip-lock bag.  I don’t mind them cold, but they’re even better if you zap in the microwave for 7-10 seconds.

While the muffins are baking, make the catfish:
Pre-heat the Airfryer at 400 degrees for ten minutes.

Dredge each catfish fillet in the eggs, then in the pork rind mixture.  Do this a second time for a double coating.  Set on paper plates while the Airfryer comes up to temperature.

How about some Tartar Sauce?
If you want some tartar sauce for the fish … and why wouldn’t you? … here’s an easy recipe: